The 101st Fighter Squadron was stationed at Otis ANG, Massachusetts. The 10st received their first F-15A/B’s in 1987 replacing the F-106A’s. The 101st was designated as an Fighter Interceptor Unit back then. 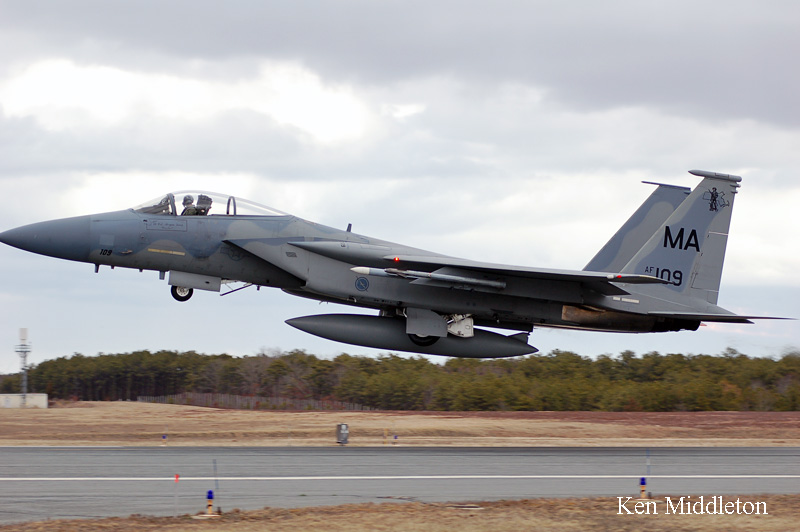 The 101st ’s conversion to the F-15 marked the first Air National Guard air defense unit to receive the Eagle. The 101st Fighter Interceptor Squadron was re-designated the 101st Fighter Squadron in April 1992. Examples of the squadron’s ability to function worldwide include a 1992 deployment of eight pilots, five F-15 Eagles, and 48 maintenance and security personnel, who deployed for five days to Canadian Forces Base, Goose Bay, Labrador, Canada. Another is the humanitarian deployment of 50 personnel from the 102nd Civil Engineering Squadron under field conditions, to the island of Eleuthera in the Bahamas in July 1993 to rebuild school buildings and municipal facilities damaged by Hurricane Andrew in 1992. 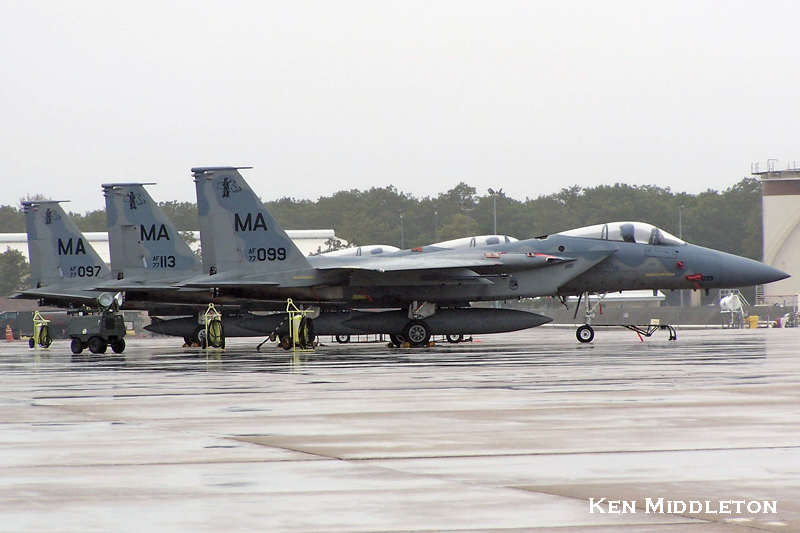 More recently, in the years 1991 through 1995 the wing deployed to Panama as part of Coronet Nighthawk, a drug interdiction operation. From 1995-1998 the wing deployed to Iceland for 45 days of air defense duty. During 1998 Otis Guard members both trained for and performed real-world contingency assignments in Iceland, Canada, Korea, and

Europe. In 1999 the wing participated in Operation Northern Watch when it deployed with its F-15 Eagle aircraft to Turkey to patrol and enforce the no-fly zone north of the 36th parallel in northern Iraq.

The wing again deployed more than 350 personnel to the Middle East and Europe in 2000 to participate in Operation Southern Watch. 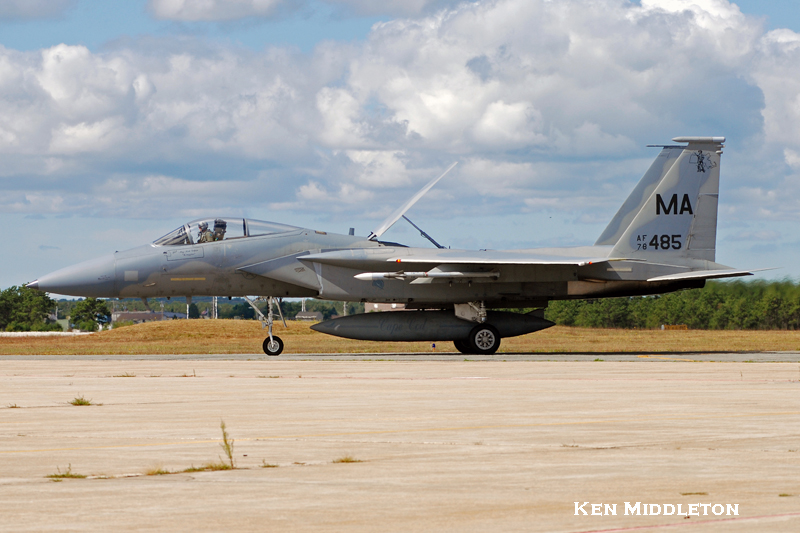 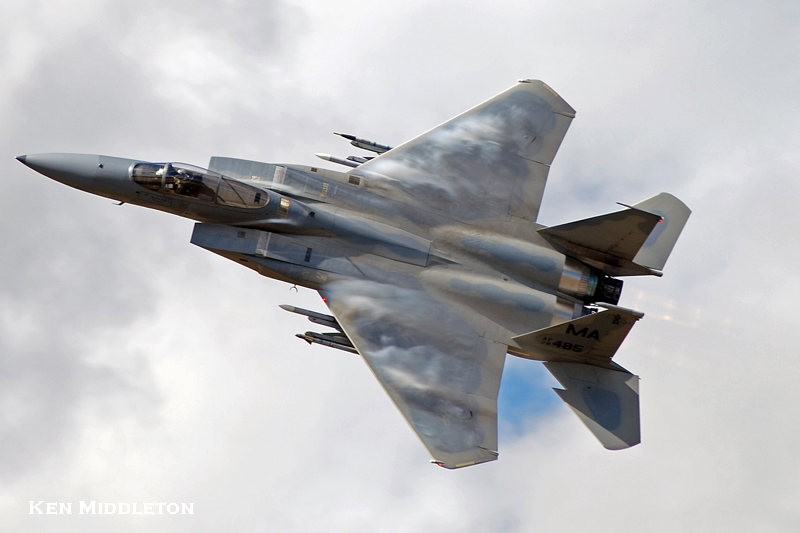 The BRAC 2005. Beginning in 2007 the 101st FS began transitioning it’s F-15s tot the 104 FW as decided under the BRAC 2005. With the grounding of the F-15 Eagles, the 158th Fighter Wing,  temporarily took over the role of patrolling the Northeast’s skies. This interruption of the F-15’s flight, coinciding with the transitioning of the fighter jets to the 104th Fighter Wing, created some issues. The move was originally scheduled to be completed at the end of January, but the grounding of the F-15’s in late 2007 and early 2008 delayed this move to the end of February.

On January 24, 2008, the 101st Fighter Squadron flew its last patrol mission. The unit’s wing commander, Colonel Anthony Schiavi, led the flight, accompanied by Major Daniel Nash, who was one of the first responders for 9/11. Fire trucks were on hand when the team landed a half-hour later, giving the planes and the pilots the customary ceremonial hose-down for the last time. 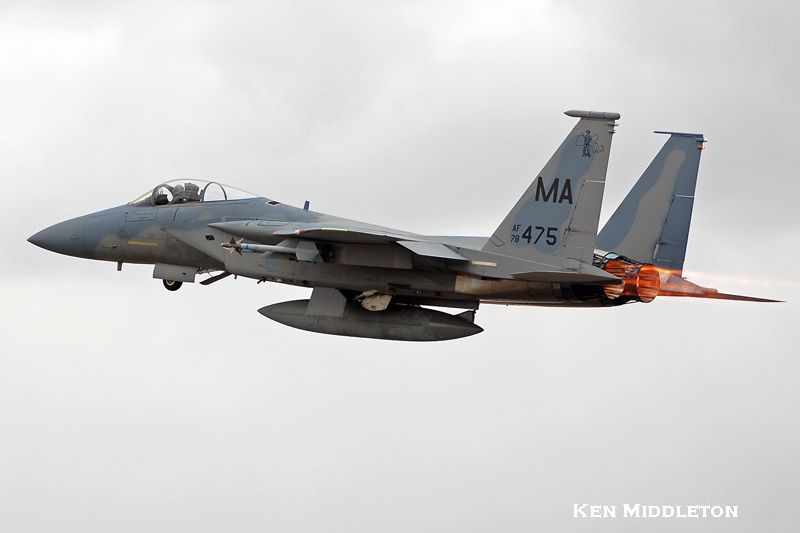 OTIS AIR NATIONAL GUARD BASE, Mass. – An Air National Guard fighter wing bid a bittersweet goodbye to its old mission as it embraced its new reason for remaining on Cape Cod 24 days into the new year.

“At approximately 1320 today, the alert klaxon sounded for the last time,” said Schiavi, commander of the highly regarded unit that is being transformed into the 102nd Intelligence Wing. The F-15 pilots and crews are being replaced by specialists who will use computer technology to acquire, analyze and distribute data gathered from all over the world to combatant commanders and others who need to know what enemy forces are doing.

It is considered a prime example of how well a military unit is adjusting to a new role dictated by the 2005 Base Realignment and Closure (BRAC) Commission. The 102nd is the Air Guard’s fifth oldest unit, born in the spring of 1921 as the Massachusetts National Guard’s 101st Observation Squadron and federally recognized that November.

“We are ready to show the Air Force, the National Guard Bureau and the nation what the Massachusetts Air National Guard can do,” said Maj. Gen. Michael Akey, the Bay State’s Air Guard commander.

The 30-minute Thursday flight included three low-level flybys around the base and signaled the end of the 102nd’s more than 35 years of continuous alert on Cape Cod. It has watched over a half-million square miles of Northeast airspace, including heavily-populated Boston, New York, Philadelphia and Washington, since June 1972. It has logged over 80,000 accident-free flying hours during that time, Schiavi said.

“On Sept. 11th, 2001, shortly before 9 a.m., our F-15s were scrambled into a clear blue Cape Cod sky, and headed south for New York City ““ to a scene that none of us could imagine,” Schiavi reminded the well wishers about how the fighters from Cape Cod were the first military aircraft to respond to the terrorist attacks at the World Trade Center. “But in the days, weeks and months that followed, the 102nd flew thousands of hours over many locations to ensure the safety of our homeland,” Schiavi added.

Other milestones have included intercepting Soviet Bear Bombers flying to and from Cuba, intercepting and escorting a hijacked Lufthansa flight to a safe landing in New York, and escorting the flight carrying suspected shoe bomber Richard Reid to Logan International Airport in Boston.

Schiavi, who has an Operation Desert Storm air-to-air combat kill to his credit, and Nash, who was one of the two pilots who first scrambled to New York, were at the controls for the final mission on January’s fourth Thursday. Tech. Sgt. Joshua Daniel, Staff Sgt. Miguel Menendez and Jerry Cronin and Pat Ryan, both civilians, were the crew chiefs who helped to launch and recover the fighters.

The aircraft were showered with arching streams of water from base fire trucks after landing, and the pilots were sprayed with champagne after leaving their single-seat cockpits in a celebratory ending to the wing’s air defense mission.

Some of the wing’s aircraft are being relocated to Barnes Air National Guard Base in Westfield, Mass., where Nash said he would continue flying the F-15s beginning in April. It will be at least a year, however, before Westfield will assume the Otis air defense mission, Nash said.

Meanwhile, Schiavi and other wing leaders will oversee the transition to the new intelligence mission.

“With all endings come new beginnings, and in just a few short months the 102nd Intelligence Wing will begin a different kind of ‘watch’ as we embark on a new 24/7 mission centered around intelligence gathering, analysis and exploitation directly supporting the war fighter and combatant commanders around the globe,” Schiavi said. “There is no doubt that we will excel in this new mission just like we have in our current one.”

Others, including the deputy commander of the North American Aerospace Defense Command (NORAD) and the Massachusetts National Guard’s adjutant general, also predicted a successful transition based on the wing’s performance after learning that its mission would be significantly changed because of BRAC.

“You can’t get any better than that. It’s hard to beat perfection,” said Bouchard. “Today may be a day of adversity, but don’t lose your focus toward the stars,” he urged the Air Guard members who will remain with the wing. Other speakers were Brig. Gen. Steven Westgate, vice commander of the 1st Air Force, and Col. Ian Sanderson, the North Eastern Air Defense Sector’s director of operations.