The 142nd Fighter Wing mission is to serve the nation, state and community by providing mission ready units, personnel and equipment for: Domination in the air superiority arena; Federal augmentation in support of national security objectives; Response to state and local contingencies; and n Pro-active involvement in activities that add value to the people and communities.

It is rully integrated into “Total Force” — Air Expeditionary Force #9. The location in the Pacific Northwestern United States is key for air defense of the nation. The Air National Guard Base is co-located with civilian international airport. The base has numerous military and civilian support agreements to benefit state and local government agencies. Hence, Portland Air Base is a BIG operation. It is not a typical ANG facility because it is host to an Air Force Reserve Wing and several other ANG/ARNG units. The actual facility employs and/or supports nearly 3,000 employees. The unique operating environment and permits provides many services to area active duty military families and retirees since the nearest active duty military installation is nearly 200 miles away.

Previously designated as the 123rd Fighter Interceptor Squadron, the squadron was renamed the 123th Fighter Squadron in 1992.

The squadron converted to the F-15A/B aircraft in 1989/90, with most of those planes coming from the 318th FIS at McChord AFB, which was being disbanded.

PORTLAND AIR NATIONAL BASE, Ore. — When most Americans think of our military involvement in the Middle East, they tend to think of the post 9/11 period. But America’s Airmen have been flying over and fighting in the region for a much longer period of time, including the long “Iraqi no-fly zone era,” which lasted between 1991 and 2003.

As part of the “Total Force,” of Active Duty, Guard and Reserve components, the Oregon Air National Guard’s 142nd Fighter Wing participated in no-fly zone combat operations over Iraq in the decade before 9/11. The deployment of early 1998 was scheduled many months in advance, as part of the air expeditionary rotation of air units between the three components. Nearly 300 wing members and six 123rd Fighter Squadron F-15A Multi-Stage Improvement Program (MSIP) Eagle fighters deployed to Incirlik Air Base, in south-central Turkey, to help enforce the no-fly zone over northern Iraq as part of Operation NORTHERN WATCH.

NORTHERN WATCH was a follow-on operation which began in January, 1997 and replaced Operation PROVIDE COMFORT, which had been in place since April, 1991, just after the 1991 Gulf War. The operations prevented Iraqi use of force against the Kurdish minority population in the north of the country. The US European Command, with coalition partners, conducted ONW air operations to enforce the UN-sanctioned no-fly zone north of the 36th parallel, as well as surveillance of Iraqi military activity in the zone.

The Redhawks joined a coalition force at Incirlik, including air units from the United Kingdom, at a time of increased tensions, when Iraqi President Saddam Hussein refused to open suspected chemical and biological warfare sites to United Nations inspection and diplomatic efforts to resolve the impasse were faltering. At the time, the Iraqi Air Force had about 300 combat aircraft, mostly day-fighters good for clear weather operations, and with little night capability, from which challenges to the no-fly zone could be mounted.

It was the first time the 142nd Fighter Wing deployed personnel to a combat zone since the Korean War. Said wing commander, Lt. Col. Larry Kemp at the time: “We have participated in numerous operational missions providing air sovereignty and surveillance in North America, Central America, and Iceland in the recent past. But this is the first time we’ve been tasked in support of a combat operation since the 1950s.”

Throughout the ONW deployment, the 142FW maintained its Pacific Northwest air defense mission capability at home station, guarding the skies from northern California up to Canada. The Redhawks remained an integral part of the North American Aerospace Defense Command (NORAD), even as they provided an expeditionary combat capability.

Oregon Air National Guard Tech. Sgt. Don Brice reflected an optimistic and professional view of the deployment, when he said to a KEX news reporter “We’ve been ready for this deployment for a long time…we don’t have to do much to these jets because they are always in top shape. We’re going over there, do our job, and we’re coming home. 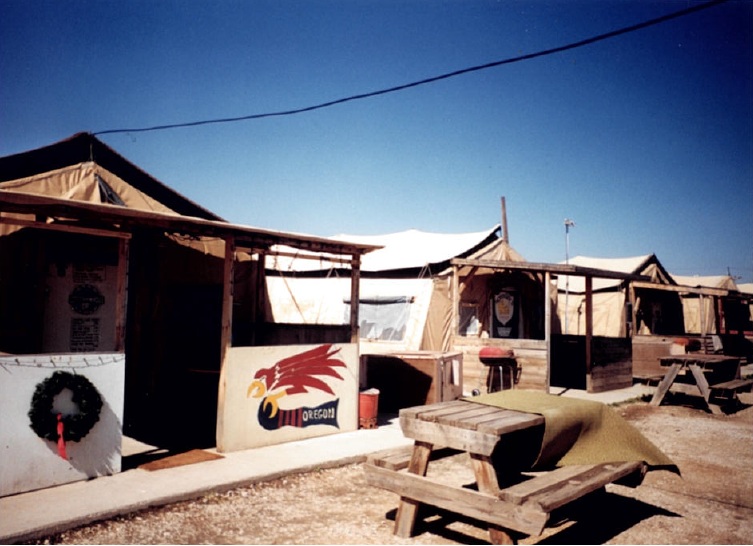 The deployment also caused a lot of action on the home front, as family members dealt with the range of issues associated with deployments, from child care to bill paying, from tax filing to home repairs, and communication during the separation. Guard members not deploying helped where they could, and the Family Program established unit points of contact to recruit volunteers to help families with needs such as mechanical problems or child care scheduling challenges.

And so the Redhawks did, deploying personnel to cover a six-week period from March 1 through April 15, 1998. Unit members mustered in three two-week rotations to cover the unit requirement. At Incirlik, about 1,300 American, 200 British and 100 Turkish military personnel took part in the operation. Deployed personnel were quartered in a tent city, with laundry and latrines in walking distance. Given the lack of running water, bottled drinking water became a standard routine. Redhawks worked up to 16 hours a day to ensure the jets were ready to meet the demands of an intense flying schedule, and they never missed a sortie.

The coalition enforcement effort employed some 45 aircraft, and pilots flew about 40 sorties a day. In order to try and remain unpredictable, take off times for missions varied. On some days the sorties were longer, and shorter on other days. Missions lasted from three to seven hours, and during the longer duration ones, fighter jets spent a fair amount of time getting to and from the no-fly zone, as well as the required aerial refueling.

In ONW, the Redhawks provided high value asset defense for collation “packages” of aircraft patrolling over the no-fly zone. The F-15s were first into the area of operations, with the flight leader serving as the mission commander for the package, leading the multi-national forces in patrolling over the northern no-fly zone. The Eagles were followed by various other aircraft types, including fighter-bombers, electronic warfare, reconnaissance, airborne early warning and tanker aircraft. Of note, HH-60 Night Hawk helicopters of the Portland-based 304th Rescue Squadron were also deployed to Incirlik in the same timeframe, providing a much-valued combat search and rescue capability.

The last Redhawk Airman returned from ONW on May 1, 1998, after some challenges with airlift schedules, country clearances and other redeployment obstacles, completing the unit’s first combat deployment of personnel since 1951. But as fate would have it, it would not be the only time the Redhawks were to fly over Iraq – a future part 2 of this Iraqi no-fly zone saga will discuss that, and illustrate how Oregon’s Airmen provided the nation with a vital capability during the decade of no-fly zone operations over Iraq.

In June 2017 the 123rd Fighter Squadron “Redhawks” deployed for three weeks to Nellis AFB in support of the Weapons Instructor Course 2017. The Redhawks, provided as the ‘Red Team’ aggressors, taking the fight to the ‘Blue Team.