The 335th Fighter Squadron is stationed at Seymour-Johnson AFB, North Carolina. The 335th received their first F-15s in 1990 and became IOC on October 1990 and became the fourth operational F-15E squadron. 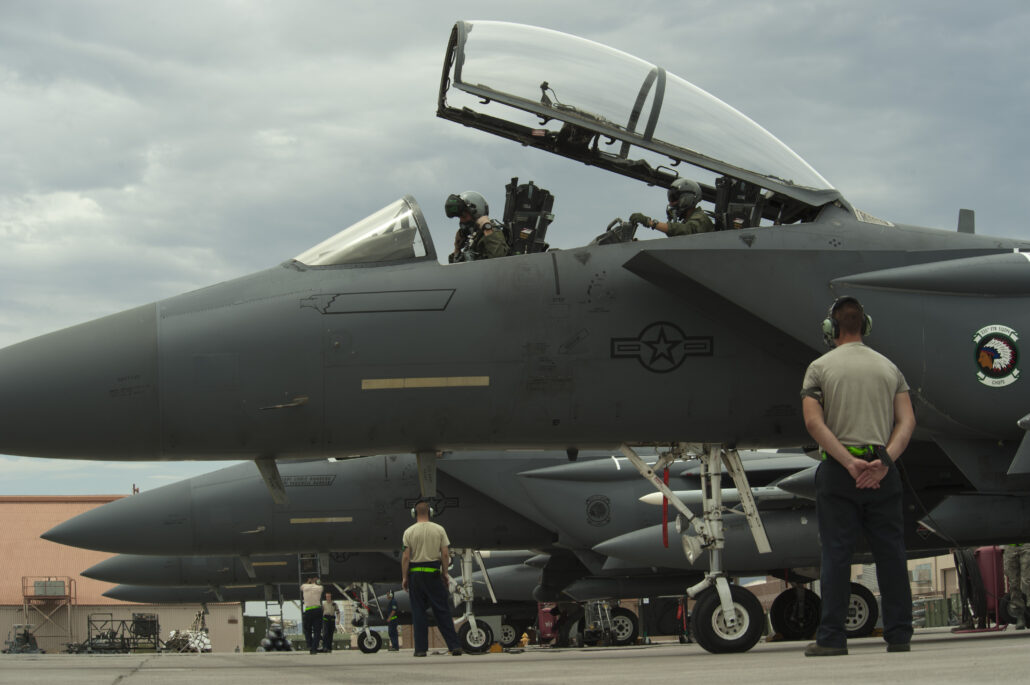 Always deployed where the action is, to support operational commitments of the United States Air Force, the history-making Chiefs are one of the finest fighter squadrons in the world. One of six operational F-15E squadrons in the U.S. Air Force, the mission of the 335th Fighter Squadron is to be prepared to deploy anywhere in the world on short notice and deliver an array of air-to-ground weapons with pinpoint accuracy. The squadron is currently authorized 24 F-15E Strike Eagle aircraft and approximately 360 officer and enlisted personnel.

On 27-28 December 1990, the 335th deployed twenty-four F-15Es along with support personnel and equipment to Al Kharj Air Base in central Saudi Arabia. On the night of 16 January, the Chiefs participated in the initial assault on Iraq, hitting communications, power networks, and airfields around Baghdad. Given the mission of finding and destroying Iraq’s SCUD missile launchers, the 335th brought Iraq’s use of this terror weapon to a virtual halt, earning the squadron the nickname “SCUD BUSTERS.” The 335th made aerial warfare history by downing an Iraqi helicopter in the air using a laser-guided bomb. During the war, the Chiefs flew 1,097 combat missions over Iraq and occupied Kuwait, dropping over 4.8 million pounds of ordnance.

After the war, the 335th continued to fly combat air patrol missions over Iraq and Kuwait until relieved by the 334th Fighter Squadron in June 1991. Since then, the Chiefs have returned to Southwest Asia several times; they deployed three times to Dhahran, Saudi Arabia, and twice to Doha, Qatar, as an Air Expeditionary Force. The AEF-III deployment in 1996 was the first for an Air Force unit to Doha. The Chiefs’ most recent deployment was in January 2002 to Kuwait, where they flew in support of Operation Enduring Freedom and Operation Southern Watch. The 335th Fighter Squadron stands ready to meet the challenges of the future and demonstrate the meaning of their proud byline: “Chiefs’ Standard.” 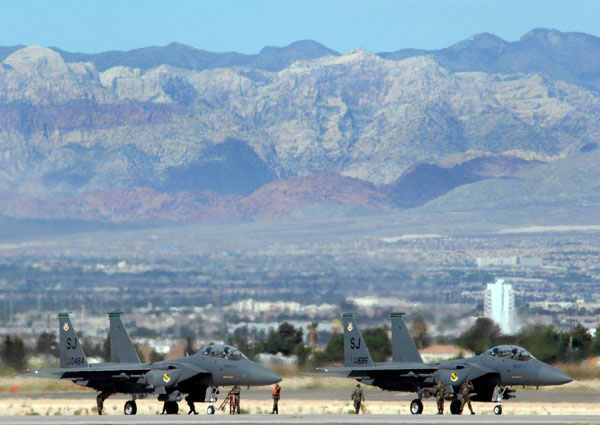 “It has taken more than 21 years of qualified maintenance technicians performing more than one million hours of inspections and repairs in all types of environments at home station, depot facilities,(temporary duty assignment) and (air and space expeditionary force) locations to ensure aircraft #89-0487 was available to deploy on numerous TDYs and AEFs,” Chief Master Sgt. John Parrott, the 335th EAMU superintendent said. “It also took careful, timely loading and maintenance by hundreds of weapons technicians in conjunction with countless hours of repairs and inspections performed by avionics, electrical and environmental, engine, fuels, egress, and structural Airmen.”

The current crew chiefs for #487 are all deployed from Seymour-Johnson Air Force Base, N.C. They agreed that good maintenance and support were critical.

“This is the squadron flag ship,” said Senior Airman Eric Rock, a 455th EAMS crew chief assigned to #487. “This accomplishment definitely shows the caliber of those before us and those who are crewing it now. They are putting the best and most motivated on the team.”

The #487 crew chiefs have been working with the same aircraft for the past year. Since arriving at Bagram Airfield, the high demand for the flag ship helped highlight the team cohesion needed to keep the aircraft mission ready.

“When we got here, it was at 8,800 hours,” said Staff Sgt. Ryan Forsse, a 455th EAMS crew chief assigned to #487. “We put 1,200 hours on it in the past three months. During that time, this aircraft dropped 15 percent of all bombs deployed in our fleet. To keep it flying at that pace, it was very important to keep the same crew on it to get to know the aircraft.”
Rock said each plane has a specific personality.

“Keeping the same crew working on it allows for the technician to see trends,” Rock said. “You get to know what is going on with it, what sounds normal and what works.”

The crew chiefs specifically acknowledged that all of the support units were integral in reaching the 10,000 flying hours milestone.

“When we have a problem that needs to be fixed by another shop, they come out quickly for this jet,” Forsse said. “This is the squadron flag ship, so all the shops push to get this aircraft fixed, armed up and back in the air. Any time we need something, they are on it.”

Lt. Col. David Moeller, the 335th Expeditionary Flying Squadron commander, is the current weapons systems officer for #487. Moeller said he fully appreciated the impact of the work done by the F-15E #487 team.

“It’s not just about the hours in the sky,” Moeller said. “The maintenance ability to keep this jet flying so it may support the current fight is amazing. This is 24-hours, all-weather, operations throughout the (Operation Enduring Freedom) battlespace. Maintenance, weapons, and all support by the 455th makes this possible. It was a total team effort.”
In addition to the ground support, a lot of work was done in the air for #487.

“This milestone also required skilled, proficient pilots and weapons systems officers flying more than 3,500 sorties,” Parrott said. “Like the crew that dropped a GBU-10 on an Iraqi Mi24 helicopter during Operation Desert Storm.”

As a personal tribute to history, Moeller chose to pass the honor of flying over 10,000 hours to Capt. Ryan Bodenheimer, a 335th F-15E EFS pilot, and Capt. Erin Short, a 335th EFS weapons systems officer.
“It just seemed appropriate that the longest flying F-15E be flown by the youngest flyers in the unit,” he said.

Perrot summed up the significance of #487’s sustained mission capability.

“It has taken 21 years of two things: pride and passion,” he said. “Pride in the work completed with fellow Airmen, ultimately for the excellence of the Air Force. And passion — regardless of the weather, obstacle or task faced, successful completion is the only goal.”