The 104th FW received its first new mission aircraft, the F-15C, on September 8, 2007. The 104th Fighter Wing with its F-15C will become the primary air defense unit for the entire Northeast, a mission transferred to western Massachusetts from the 102nd Fighter Wing at Otis Air National Guard on Cape Cod.

Col. Tom ‘Sling’ Bladen, 104FW Commander, flew an incentive flight May 2021 for Natalie Fontenot, daughter of Lt. Col. Morris ‘Moose’ Fontenot Jr. Lt. Col. Fontenot is the 13th name on the F-100 Memorial at Barnes that honors those lost in flight. All of the 104FW pilots present came out to congratulate her after her flight and pose for a photo with her to commemorate the moment. (Photos by Master Sgt. Lindsey S. Watson)

8/6/2014 – BARNES AIR NATIONAL GUARD BASE, WESTFIELD, Mass. — Airmen from the 104th Fighter Wing took part in Exercise Cope Taufan 2014, a biennial large force exercise between the Royal Malaysian Air Force (RMAF) and the United States Air Force from June 9-20, 2014.
The objective of Exercise Cope Taufan is to enhance the combined readiness and interoperability of the Malaysian and U.S Air Forces while promoting peace and stability in the region. The deployment also demonstrates a U.S. capability to project forces strategically in a combined, joint environment.

The tactical and cultural exchange provided 104th pilots the opportunity to engage with F-22 Raptors of the Hawaii Air National Guard and MIG 29 Fulcrums of the Royal Malaysian Air Force in a realistic live-fly training environment.

The Southeast Asian exercise marked the farthest distance the 104th FW has deployed the F-15 Eagle and support personnel, as well as the first training exercise outside the continental United States (OCONUS). The austere conditions at the air base, RMAF Butterworth, and oppressive heat, reaching 100% humidity at times, presented a myriad of challenges for the Massachusetts Guardsmen. 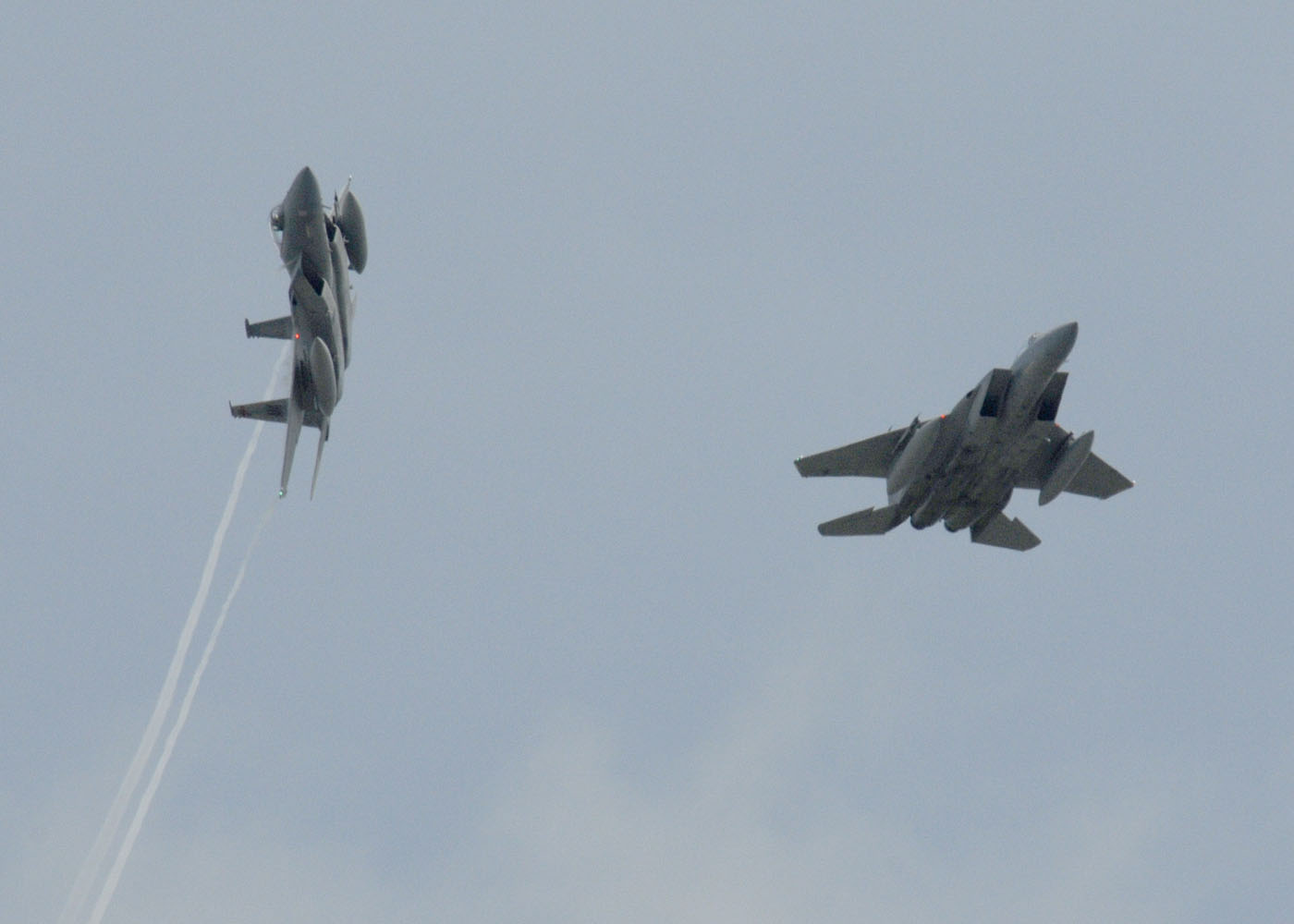 The expedition proved a rigorous test of the unit’s operational and logistical capabilities.

“Cope Taufan was a great tactics sharpener and relationship builder,” said Haldopoulos, a native of Peachtree, Georgia and resident of Longmeadow, Massachusetts.

“It is important for our unit to deploy OCONUS and practice our tactics, techniques and procedures in order to continue to perform the defensive and offensive counter air missions that we focus on. At Cope Taufan we were able to practice these tactics with the F-22 Raptors and against the Mig 29 Fulcrums,” said Haldopoulos. “As well, we were able to work closely with our partners in the Hawaiian Air National Guard in the Pacific Command area of responsibility. It was a great experience,” he said.

Haldopoulos grew to appreciate the distance between the U.S and the Malaysian peninsula.

“From a logistics perspective, we learned some valuable lessons. Ensuring that we bring the equipment most commensurate with the need and conceptualizing the distance required to ship items was important,” said Haldopoulos. “As our military pivots to Asia, we need to recognize the investment in infrastructure required to reflect that commitment.”

Flying against aircraft of the former Soviet platform was a huge benefit to the pilots.

“Most of our guys had never flown against a MIG,” he said. “Prior to deploying, we spoke extensively about engaging these aircraft; so flying against them in a basic fighter maneuver environment was an invaluable training experience.”

“I have flown for a long time, but have to admit it that flying against the Mig 29 was an exhilarating experience,” he added.

During these simulated engagements, the 104th pilots consistently outmaneuvered their adversaries and demonstrated a level of expertise that left little doubt as to the victor.

“Our pilots represented the USAF well and our maintenance folks went above and beyond. They did a fantastic job-working late and doing extra tasks to allow us to perform at the highest level,” he said.

Chief Master Sgt. Richard Tudisco, the 104th Maintenance Squadron Superintendent and non-commissioned officer in charge, was pleased with the ability of unit members to surmount difficulties and offer practical solutions to problems.

“The airlift was a challenge and keeping track of everything wasn’t easy, but we did extremely well,” said Tudisco, a native of Derby, Connecticut.

“The temperature was ‘Gurkha hot’ and we needed to watch rest cycles, hydration, and any heat related issues. No one can recall experiencing climate and conditions similar to Malaysia. It was a challenging work environment but we accomplished the mission. I am proud of our people,” he said.

Haldopoulos lauded the efforts of the 104th Airmen involved in Cope Taufan 2014.

“We have some very capable leaders and experts in their respective fields,” said Haldopoulos. “Our folks are well trained, experienced and pretty damn smart. Cope Taufan 2014 was a huge success due the hard work and trademark professionalism of 10th Fighter Wing personnel.”

Unit leaders expect to deploy to similar exercises in the future.

Longmeadow resident Lt. Col. Morris Fontenot Jr. known to us as “Moose” was one hell of an Air Force officer and fighter pilot. And behind “Moose” is an absolute bedrock of a woman, his wife Kara Fontenot. They have two beautiful daughters, Nicole, starting her freshman year at LHS and her older sister Natalie entering 10th grade next week. More about these folks in a moment…

We are here tonight to pay our respects to Moose. The town of Longmeadow, the 104th Fighter Wing, the Air National Guard and the United States of America lost a true hero this week. What kind of hero you ask? If only I had all night… Most Air National Guard units create fighter pilots two ways: we either grow them up from within the ANG, affectionately known as “Guard Babies”, or we hire them off of the Active Duty Air Force after having spent several years as officers and pilots serving their country all over the globe. Well Moose was an Active Duty convert like most of us up here but he was a little different. Most pilots make the Active Duty-to-Guard transition right around the middle of their careers, as senior Captains or junior Majors. Moose Fontenot came to us after having served over 17 years in the Active Duty and as a graduated Squadron Commander of the 67th Fighter Squadron at Kadena Air Base in Okinawa, Japan. We were thrilled to have the opportunity to call Moose a Barnestormer! He took a huge leap of faith in joining the guard with less than 3 years remaining before he qualified for a full retirement from the active side. But Moose wasn’t about benefits and earnings, he was a fighter pilot’s fighter pilot and he was motivated by things like tactical performance, surrounding himself with top notch organizations and people and making those around him better, both as professionals and as human beings. He joined the 104th Fighter Wing this past winter and set off shock waves throughout the Active Duty world as someone who had the Air Force in the palm of his hand and decided to give the Air National Guard a shot. He was one of the most respected and popular officers in our Air Force and we thought, “he’s coming to Barnes” – kinda’ like Lebron going to Cleveland. Right away he fit in to our team and immediately began impressing a rather cautious, guarded and extremely proud group of airmen at the 104th. It didn’t take long for people to realize what a gem he was and he had an extremely bright future ahead of him. That future was so inexplicably cut short this past Wednesday, 27 August 2014 at approximately 9:15 am EST when his F-15C crashed into the side of a mountain near Deerfield, Virginia. This weekend, we will hold a memorial service for Moose, his family and the 104th Fighter Wing community. In early October, hundreds, possibly thousands of friends and family will gather at the United States Air Force Academy in Colorado Springs, CO to bury and remember our fallen comrade. We wanted to take a moment tonight to tell you a little something about this gem of a human being and to allow the people of Longmeadow to pay their respects to Moose and his family.

His family…Kara, Nicole and Natalie are just about the best three girls you could ever imagine. They have been extremely strong throughout this terrible ordeal and I have learned so much and been inspired just being witness to their love and character. On Thursday afternoon, I had to do what was, by far, the most difficult thing I’ve ever done in my life. I pulled into their driveway, with our Wing Commander, Col Keefe and Moose’s good friend Maj Elmer Gilluly, my wife Cathleen and Elmer’s wife Laura and we had to tell Kara that Moose didn’t get out of the airplane; he didn’t survive the crash. And I can tell you, as miserable a moment as that was, Kara’s composure and ability to handle this avalanche and think of her girls and Moose’s extended family made our job a little less difficult. She’s an amazing women; her daughters are just like their mom and we are lucky to have them here in Longmeadow. They have shared with me that Longmeadow is their home and will remain that way in the future. The men and women of the 104th Fighter Wing will care for Kara and the girls – you can count on that and I ask that you keep them in your hearts and prayers over the next days, weeks and months to come and continue to welcome them to this great town.

We will remain here for a bit to share with you some Moose stories and we look forward to getting to know some of you better. We want this town to know more about this Air Force legend both in life and in death, Lt Col Morris “Moose” Fontenot Jr.

Major Travis ‘Wrath’ Jarvi and Maj. Garth ‘Dart’ Wolber completed their ‘fini’ flights October 13, 2018 at Barnes Air National Guard base, Westfield, Massachusetts. The pilots departed Barnes around 9:00 AM, just as it began to rain in Western Massachusetts. They were greeted on the flightline by friends and family upon their return. In keeping with tradition, the pilots were hosed down with water and champagne by their families.