The 12th Fighter Squadron was stationed at Kadena AB, Japan when it converted from the F-4D to the F-15C/D in 1979. the 12th TFS was part of the 18th Tactical Fighter Wing. The only F-15 Wing in the Pacific Air Forces. The 12th (T)FS missions were to protect Southern Korean air space together with a big part of the Pacific.

From 1980 until 1999, the squadron continued to fly from Kadena AB, Japan, participating in over 50 deployments around the world in support of combat training and international relations.  From November 1998 to January 1999, the squadron deployed to Incirlik AB, Turkey, in support of Operation NORTHERN WATCH.  In November 1999, the squadron fell victim to internal Air Force downsizing and force restructuring; basically their capabilities and presence were no longer required at Kadena AB, Japan.  On a positive note, their long and distinguished military honors warranted their retention as an active combat unit of the Air Force, now all they needed was a new home.  Under Air Force guidelines set forth in the early 1990s, it was decided they were to transfer without personnel and equipment to Elmendorf Air Force Base, Alaska, where they replaced the inactivating 54th Fighter Squadron in April 2000.   Since their activation, the squadron has continued to serve this country with the same distinction and honor of those before them.  They have participated in several deployments to include missions in support of Operation NORTHERN WATCH, Operation NORTHERN DENIAL, Operation SOUTHERN WATCH, and most recently in defense of America in wake of the September terrorist attacks on New York City and the Pentagon. 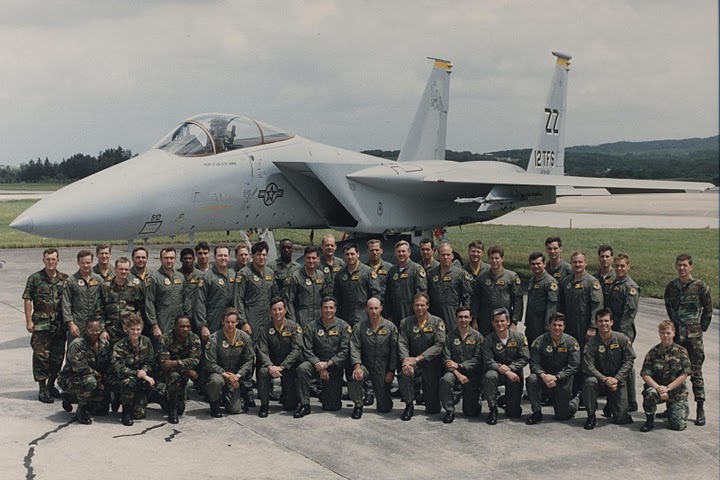 Friday, November 5th 1999 was not a very jubilant day in the life of the US Air Force’s 18th Wing based on Kadena in Okinawa. On that day, noon was midnight for many as the famous 12th Fighter Squadron – most intimately known as the “Dirty Dozen” – was inactivated for good. 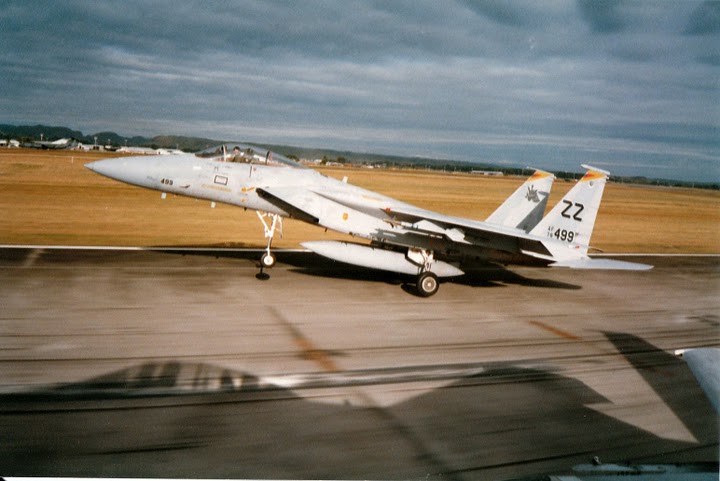 Lt. Col. Timothy “Tex” Merrell was the last Commander for the 12th FS. During a ceremony that was marked by the absence of smiles and cheers, the ace F-15 pilot “threw away” the flag of the squadron he had been leading for the past 17 months, in the presence of Col. Douglas Cochran, the 18th Wing Operations Group Commander. That ceremony symbolized the end of a famous tactical group within the US Air Force worldwide, a group that had had a history of 4 dozen decades and 10 years.

The 12th FS was first activated in 1941, and known then as the 12th Pursuit Squadron. After tasting combat action in the South Pacific in the 1940s, it was renamed the 12th Fighter-Bomber Squadron in January 1950. Six months later, it was deployed in Korea during the war. Immediately after the conflict on the Korean peninsula, the 12th acquired a home on Kadena from November to December, operating from the Yomitan Auxiliary Air Base. The it left for Clark Air Base in the Philippines in 1957, before returning on March 25, 1958.

Under the name 12th Tactical Fighter Squadron, it was deployed in Vietnam and Thailand in the 60s. In 1968, it stood alert in south Korea for six months after North Korea seised the USS Pueblo. Since 1980, it has kept the name it died with last Friday. It has taken part in several actions, made thousands of sorties to places as distant as Northern Iraq, from November 1998 to February 1999, as part of the United Nations efforts to protect the Kurds there. The 12th FS was last deployed from Kadena in October of this year, when it joined the Australian Defense Force in joint exercises known as Crocodile ’99.

In view of the squadron’s rich history, the amount of emotion that transpired from its inactivation is comprehensible. Lt. Col. Merrell covered those feelings with words of consolation: “As we stand down the 12th fighter Squadron at kadena here today, the fifth of November, 1999, we can take consolation in knowing that the unit is being reassigned,” he said. “Although most people and equipment of the 12th will remain here in the 18th Wing, the institution, the history and the memory of the Dirty Dozen will live on.”

However, uncertainty about the future still looms for many of the former squadrons devoted fighters. Col. Douglas Cochran had a word on that: “Any time we stand down a unit, especially one with such a rich heritage and long list of honorable accomplishments, it is a very difficult task,” the 18th Operations Group Commander said. “As we stand down the 12th FS, we are still not sure of its destiny. We are confident however, that it will find a new home and continue its traditional role of excellence in combat fighter aviation.”

Before the inactivation of the Dirty Dozen, the 18tgh Wing had 54 F-15 warplanes. The aircraft were divided into 3 groups of 18. Now that one squadron is gone, five of those F-15s will return to the United States, and one will remain on standby at kadena, while the remaining 48 will be managed under 2 new squadrons of 24 aircraft each.

Official sources at kadena all insist that the recent inactivation is a standard practice in the Air Force that has been going on since the end of the Cold War on several US bases worldwide. The main motivation is to achieve “the greatest efficiency out of the available resources,” Public Affairs Officer Hoey told Japan Update. He also said the inactivation has nothing to do with failure to attain recruitment targets. Nor were financial matters and constant discussions with Okinawa Prefecture authorities to reduce the American military presence on the island cited as reasons to end the 12th FS on Kadena.

7/17/2007 – ELMENDORF AIR FORCE BASE, Alaska — The 12th Fighter Squadron celebrated its 25th anniversary of winning the 1981 Raytheon Award by earning a second.

The soon-to-be decommissioned squadron is the winner of the 2006 Raytheon Award. Started in 1953 by Hughes Aircraft Company, the trophy is given annually to the top air-superiority or air-defense squadron in the Air Force.

“To put it in perspective, the Dirty Dozen (12th FS) was awarded this honor out of nearly 50 squadrons,” said Lt. Col. Alan Kollien, 12th FS commander. “It’s truly a great achievement for the fighters and our 12th AMU (Aircraft Maintenance Unit).”

From Jan. 22-Feb. 7, 2006, the 12th FS participated in the first-ever Coalition Coal Warfighter Red Flag. It was the largest Red Flag exercise in more than three years, involving 26 units from five countries with more than 1,650 maintainers and more than 500 operators flying 131 aircraft. The squadron deployed 12 F-15Cs and flew 145 sorties for 321 hours, with an overall mission capable rate of 95 percent and zero safety incidents.

During the 2006 Northern Edge, the Dirty Dozen led the Pacific Command, flying 169 sorties and 467.9 hours — the largest squadron contribution to the most relevant large force exercise ever executed, said Colonel Kollien.

Despite the Alaskan climate, the 12th AMU had the highest F-15C mission-capable rate in the active duty Air Force — 86.9 percent. Additionally, the 12th AMU compiled the best maintenance statistics in most major categories and met all Air Force maintenance indicator standards for the entire fiscal year.

“The 12th AMU’s outstanding efforts in 2006 were among the best in the Combat Air Force and we quite honestly would never have won had they not done such an exemplary job,” said Capt. Ryan “Jolt” Pelkola, a 12th Fighter Squadron pilot.

The squadron experienced no mishaps – aircraft losses or damage exceeding $20,000 or personnel injuries causing lost work time — in 6,380 hours of flying and only four reportable events which was zero cost to the Air Force.

“The men and women of the 12th AMU took an enormous amount of pride in delivering the world’s finest fighter aircraft to our operators every day,” said Capt. Jason McFeaters, 12th Aircraft Maintenance Unit officer in charge. “Whether it was here at Elmendorf providing top-cover for our nation, or on the road honing our combat skills at various training events, we enjoyed a tremendous relationship with our operators and possessed an understanding that at any time we were ready to hit the road as a team and take overwhelming air power to our enemy.”

This is the second Raytheon Award given to a fighter squadron at Elmendorf in six years. The 19th Fighter Squadron won this honor in 2000. The 12th FS will be inactivated in October and has begun transferring some personnel and aircraft to the 19th FS.