The 110th Fighter Squadron is stationed at Lambert Field, St. Louis Missouri. The 110th received their first F-15A/B’s in May of 1991 replacing the F-4E’s. The 110th was one of the last Air National Guard unit’s to convert to the F-15. The 110th has been one of the most experienced Eagle Communities with at the peak of the F-15 era, the squadron hosted over thirteen FWS graduates. The average hours of a 110th FS pilot was 2,500 and among the squadron members where three mig killers. Very sadly the Air Force decided to convert the “Lindberg own” from one of the greatest F-15 squadron to a Bombartment squadron, becoming the first ANG B-2 bomber unit in 2008. Marking and end of an Era.  “Eagle Country” will try to keep the legacy of this great Fighter unit alive.

by Capt. Bridget Zorn 131st Fighter Wing Public Affairs
6/16/2009 – St. Louis — The Missouri Air National Guard commemorated the culmination of 86 years of flying operations in St. Louis in an End of Era ceremony coinciding with the closure of the base fire house and the 131st Fighter Wing’s final F-15C Eagle departure from Lambert International Airport Saturday June 13.
An estimated crowd of 2000 Guardsmen, retirees, family and community leaders attended the End of Era event. Former members traveled from other states, including Florida, Tennessee and Ohio to participate in what was one of the wing’s more significant milestones since it was established in 1923

“Flying the F-15 is a thrill. Think of the funnest [sic] thing you ever did and multiply that by 10,” said Colonel Robert Mohr, 131st Operations Group Commander.

“I’m confident that the units receiving these aircraft will find them in extraordinary condition and I wish them safe flying and much success,” said Col. Kelk, who flew his final F-15 sortie in March.

BRAC law allowed for the manpower associated with the F-15s to be used for Total Force Integration initiatives. In 2006, Missouri and Air Force leaders took advantage of the newly available maintenance and operations manpower when they announced a new ANG B-2 classic associate unit. With a new mission, more than 550 of the 131st Fighter Wing’s personnel would fly and operate the B-2 Stealth Bomber at Whiteman AFB.

Senator Christopher “Kit” Bond, a proponent of the Missouri National Guard commented, “I am pleased that the U.S. Air Force found a way to preserve the 131st, one of the most experienced and proven Air Guard units in the country. To be chosen from Air Guard units across the country, this announcement is a real honor for the 131st.”

“As things change, there are new beginnings and with this change our new beginning is at Whiteman in the B-2 bomber,” Col. Leeker said.

For the past three years, the unit has prepared for the transition from the F-15 to the B-2 on two fronts; at Lambert ANGB in St. Louis and about 200 miles away at Whiteman AFB in Knob Noster, Mo. Establishing a new ANG B-2 mission at Whiteman AFB and the drawdown of the F-15 mission at Lambert ANGB not only required unit leaders to split time between two locations, but also required that the unit’s manpower be divided between the two locations.

The extensive planning and coordination with Air Combat Command, National Guard Bureau and within the unit ensured that the unit’s transition was seamless despite the limited manpower and two operating locations.

Although the decision to put Guardsmen into the B-2 preserved most of the jobs put at risk by the BRAC decisions, firefighter positions were not spared. 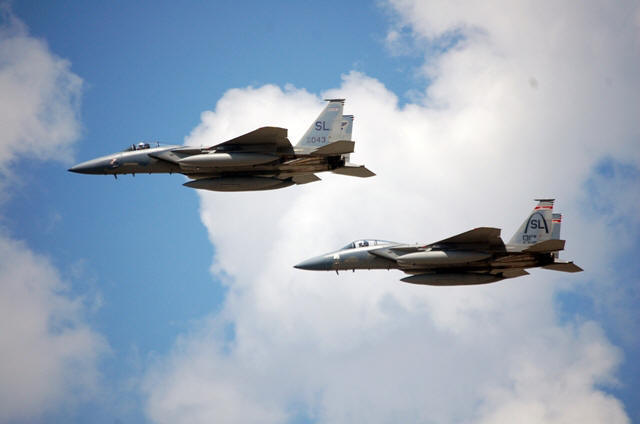