A Hawaii Air National Guard F-15 from the 199th Fighter Squadron taxis for takeoff Aug. 17 at Hickam Air Force Base, Hawaii. The 154 Wing of the Hawaii ANG is hosting Dissimilar Aircraft Combat Tactics training with F-16s from the 93rd Fighter Squadron of Homestead Air Reserve Base, Fla. in exercise Cactus Aloha. (US Air Force photo by Master Sgt. Ray Sarracino)

by Tech Sgt. Cohen A. Young

The HIANG is upgrading to the F-22 Raptor, a fifth generation fighter, and received their first two Raptors in July.

The ANG is the lead in a total force concept that already exists at JB Hickam with the C-17 Globemaster III. The 199th FS will fly and help maintain the 20 F-22 Raptors that bring another capability to the HIANG.

Many of the current F-15 pilots of the HIANG are eager to start training and flying the Raptor, but will still sorely miss the Eagle aircraft, which the unit has flown since 1987, said Lt. Col. James Sage, a pilot with the 199th FS. 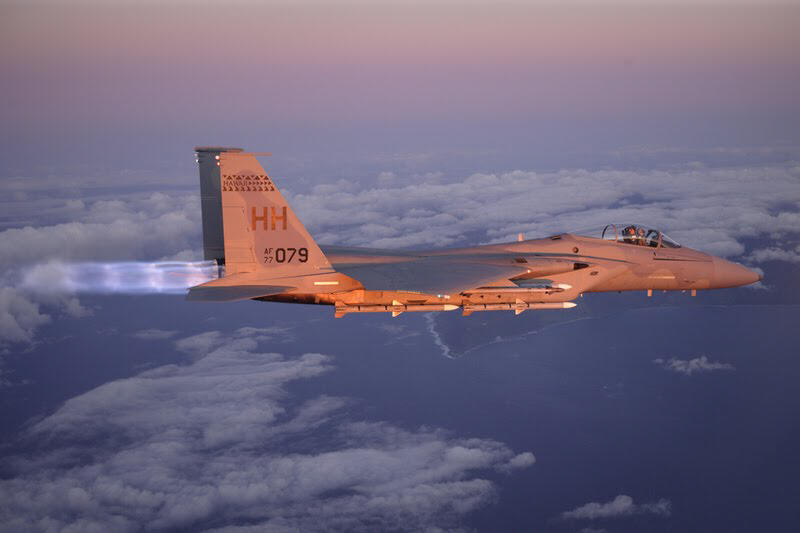 “It’s like saying goodbye to a good friend,” said Colonel Sage said. “It was exciting flying it for the last time, and especially against a F-22, but at the same time the F-15 has always brought me home safely and been an outstanding aircraft.”

The three remaining F-15s will depart JB Hickam Sept. 1, and with that, two of the fighters will move onto the 56th Aggressors Squadron at Nellis AFB, Nev., while the other will move onto the 120th Fighter Wing of the Montana Air National Guard. The Montana unit has assumed the HIANG’s air-defense mission for the next year as the HIANG transitions to the F-22 said 199th pilot Lt. Col. Mark Ladtkow.

“It’s somewhat a bittersweet feeling flying the last training mission of the F-15 with our unit,” Colonel Ladtkow said. “I’m blessed to have the upcoming opportunity to fly the F-22, but the F-15, which I’ve flown for 17 years, is a friend of mine and will be missed.”

Colonel Ladtkow is a 20-year veteran of the military, with the last six being part of the ANG. He is slated to deliver his jet to the Montana ANG in September.

“The 199th (FS) proves that National Guard forces are capable of maintaining a strategic presence with its active-duty association and providing a great value to our nation and the state of Hawaii,” said Gen. Craig R. McKinley the chief of the National Guard Bureau.

The F-22, a single-seat, twin-engine aircraft, which utilizes stealth technology, was originally designed as an air-superiority fighter.

“These F-22 Raptors are the state-of-the-art, air-superiority fighters, and couldn’t be located at a better place,” said General McKinley.

Flying Down Under with the RAAF

10/4/2008 – WILLIAMTOWN, Australia — The 199th Fighter Squadron marked the beginning of the end of the F-15 era with a recent deployment to Australia in support of Exercise Sentry Down Under Sept. 3-22.

Sentry Down Under, a joint exercise between the HIANG and the Australian Air Force, gave more than 100 HIANG members an opportunity to train in unfamiliar surroundings and to support Australian Air Force’s Weapons Officer’s course.
“We pulled people out of their comfort zone, out of the home environment where they are very comfortable with unlimited resources and put them in an environment with a limited number of personnel, a few airplanes, and limited parts,” said Lt. Col. Glen Nakamura, detachment commander for Sentry Down Under.
In the course of training, supply and communications challenges, and other unexpected events crept into the operations.
“Having unplanned events actually prepares us better for combat,” said Lt. Col. Nakamura. “It teaches us to operate and think outside the box.” “It’s all about getting the mission done, one team, one fight,” added Lt. Col. Nakamura.
Every deployment is like practice for the real thing, building up your equipment and being able to operate away from home, said Chief Master Sgt. Craig Harimoto, who was in charge of ground safety during Sentry Down Under.
While the HIANG was learning how to overcome adversity and operate outside the box, the Australian Air Force honed their aviator skills.
“The Guard is working with us for counter air defense exercises,” said Wing Commander Phil Gordon, Commanding Officer No 2 Operational Conversion Unit.
“They’re flying both as good guys and adversary aircraft, giving us realistic threat simulations,” he added.
“The Australian pilots have been fantastic. They’re outstanding aviators,” said Lt. Col. Nakamura.
According to Wing Commander Gordon, the high quality of the next generation of weapons officers that the Royal Australian Air Force will produce will be, in no small part, due to the Guard.