Red Flag, a realistic combat training exercise involving the air forces of the United States and its allies, is conducted on Nevada’s vast bombing and gunnery ranges. It is one of a series of advanced training programs administered by the Air Warfare Center and the 414th Combat Training Squadron here.

Most of the aircraft and personnel deployed here for Red Flag make up the exercise’s “blue” forces. These forces use various tactics to attack range targets, such as mock airfields, vehicle convoys, tanks, parked aircraft, bunkered defensive positions and missile sites. These targets are defended by a variety of simulated ground and air threats to give participant aircrews the most realistic combat training possible.

This exercise sharpens aerial combat skills by providing realistic training in a combined air, ground and electronic threat environment — the same environment that is found on any potential battlefield around the world. The base hosts four Red Flag exercises every year.

Red Flag has affected almost every pilot who takes to the skies in defense of the US. Today, Red Flag includes the air forces of the United States and its allies. Most of the people deployed are part of the “Blue” forces. These forces participate in attacks on mock airfields, vehicle convoys, and missile sites.

The “Red” — or aggressor — forces’ threats include electronically simulated surface-to-air missiles and anti-aircraft artillery, as well as an opposing enemy force composed of pilots trained to fly the F-16C to duplicate the tactics and techniques of potential adversaries.

Some six exercises are held a year. A typical Red Flag is six weeks long, which is broken into three two-week periods. The goal is for each crew member to fly eight to 10 missions during the two-week period. When units deploy to Red Flag, they must perform all aircraft maintenance, being as self-sufficient at Nellis as they would be in a wartime environment. The average Red Flag fields more than 100 aircraft, including fighters, bombers, refuelers, airlifters, rescue, airborne warning and control system, and electronic jammers. In 25 years, more than 311 different types of aircraft from 25-plus nations have participated. Since its inception in 1975, Flag has trained more than a half million pilots, maintainers and support troops.

Red Flag was established in 1975 as one of the initiatives directed by Gen. Robert J. Dixon, then commander of Tactical Air Command, to better prepare forces for combat. Tasked to plan and control this training, the 414th Combat Training Squadron’s mission is to maximize the combat readiness, capability and survivability of participating units by providing realistic training in a combined air, ground and electronic threat environment while providing for a free exchange of ideas between forces. 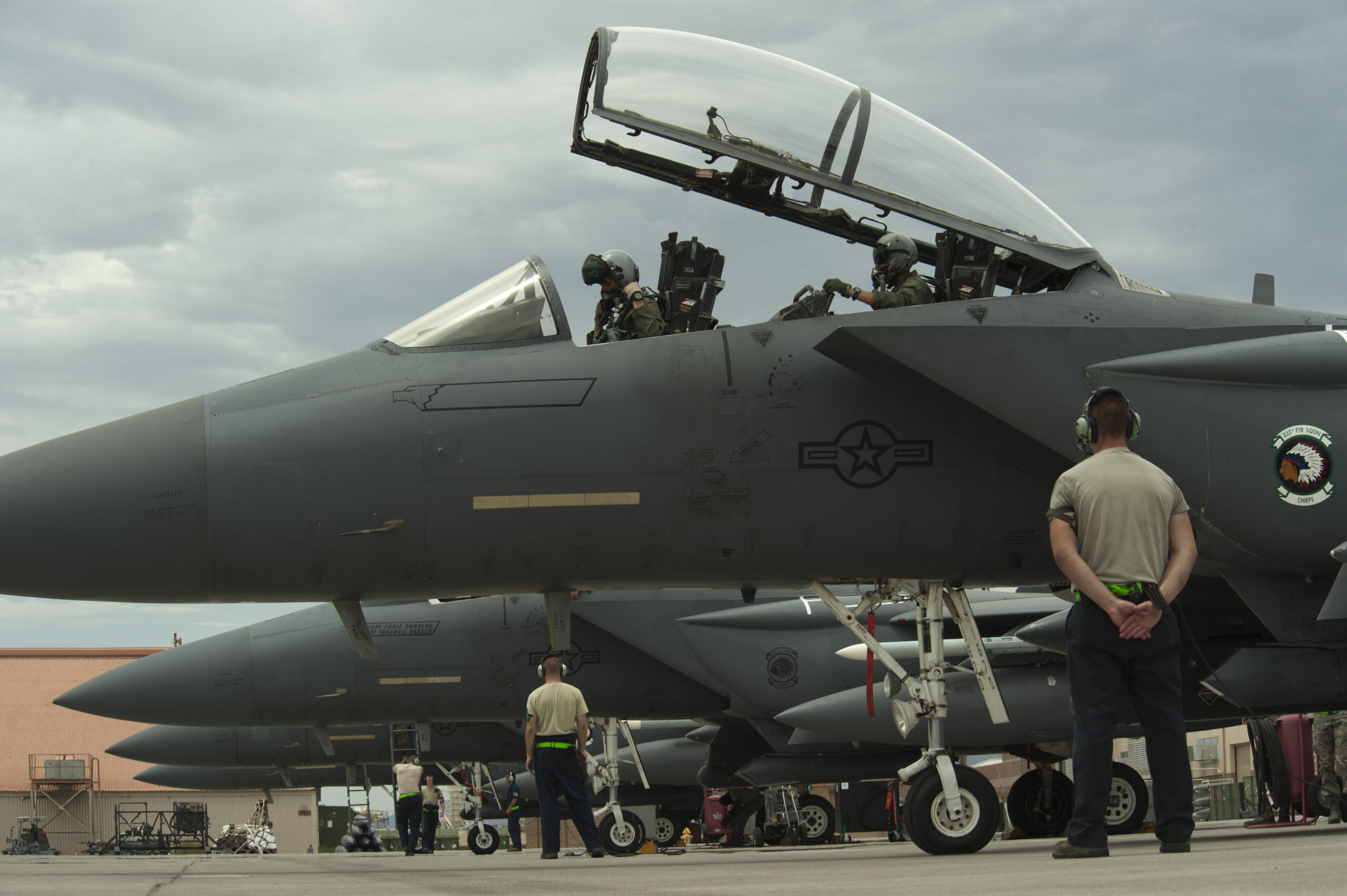 Col. Richard “Moody” Suter based his plan for Red Flag on lessons learned from Vietnam. Young pilots and crew members were either shot down or had an accident during their first 10 sorties. His plan was to get those young pilots into a combat-structured environment, where those first 10 missions could be performed in the controlled arena of an exercise. As legend has it, he drew up the initial concept on a cocktail napkin when he was stationed at Nellis Air Force Base, Nev. As a major, working as an operations officer on the Air Force staff in the Pentagon, he took his vision and saw it through to fruition in 1975.

Another Suter legacy is his driving force behind setting up Checkmate, which Air Force officials have described as a “think tank” for wartime scenarios, and the Warrior Preparation Center, Einsiedlerhof Air Station, Germany, which is used for training senior battle commanders in the art of war.

In 2001 the annual Red Flag exercise brought in more than 7,000 participants and 120 aircraft from U.S military and allied air forces from Spain, Singapore, Germany, France and the United Kingdom March 3 to April 13. Red Flag is divided into three periods lasting two weeks each. Allied aircraft flying in the first period include GR-7 Harriers from the United Kingdom; EF-18 Hornets from Spain, Tornados from Germany; and F-16 Fighting Falcons from Singapore. United States forces included F-16s, F-15 Eagles, B-52 Stratofortresses, E-3 Sentries and KC-135 Stratotankers. Allied aircraft during the second period included GR-4 Tornados from the Royal Air Force; Mirage 2000s from the French air force; and Tornados from the German air force. United States forces will included A-10 Thunderbolts, F-16s, EA-6 Prowlers, E-3s and KC-135s. During the final period of Red Flag, March 31 to April 14, allied participation continued to include Tornados from the United Kingdom and Germany, and the Mirage 2000 from France. United States aircraft continued to include B-52s, F-16s, E-3s, and F-15C’s and KC-135s. All three periods included various cargo and support aircraft as well as helicopters.

Eielson Air Force Base and Elmendorf Air Force Base are the home of RED FLAG-Alaska, a realistic, 10-day air combat training exercise held up to four times a year. Each RED FLAG-Alaska exercise is a multi-service, multi-platform coordinated, combat operations exercise and corresponds to the designed operational capability of participating units. In other words, exercises often involve several units whose military mission may differ significantly from that of other participating units. RED FLAG-Alaska planners take those factors into consideration when designing exercises so participants get the maximum training possible without being placed at an unfair advantage during simulated combat scenarios.

RED FLAG-Alaska is a Pacific Air Forces-sponsored exercise. Originally named COPE THUNDER, It was moved to Eielson Air Force Base, Alaska, from Clark Air Base, Philippines, in 1992 after the eruption of Mount Pinatubo on June 15, 1991 forced the curtailment of operations. COPE THUNDER was redesignated RED FLAG-Alaska in 2006.

When the decision was made to relocate COPE THUNDER, Air Force officials viewed Eielson as the most logical choice. That decision was based partly on the fact that Eielson’s 353rd Combat Training Squadron already controlled and maintained three major military flight training ranges in Alaska.

Initiated in 1976, COPE THUNDER was devised as a way to give aircrews their first taste of warfare and quickly grew into PACAF’s “premier simulated combat airpower employment exercise.”

Prior to Operation Desert Storm, less than one-fifth of the U.S. Air Force’s primary fighter pilots had seen actual combat. While the percentage of combat-experienced pilots has increased in recent years, a high percentage of pilots hadn’t been thrust into combat. Analysis indicates most combat losses occurred during an aircrew’s first eight to 10 missions. Therefore, the goal of RED FLAG-Alaska is to provide each aircrew with these first vital missions, increasing their chances of survival in combat environments.

On an average, more than 700 people and up to 60 aircraft deploy to Eielson, and an additional 500 people and 40 aircraft deploy to Elmendorf Air Force Base, for each RED FLAG-Alaska exercise. Most participating RED FLAG-Alaska units arrive a week prior to the actual exercise. During that time, aircrews may fly one or two range orientation flights, make physical and mental preparations, hone up on local flying restrictions, receive local safety and survival briefings, and work on developing orientation plans.

During the two-week employment phase of the exercise, aircrews are subjected to every conceivable combat threat. Scenarios are shaped to meet each exercise’s specific training objectives. All units are involved in the development of exercise training objectives. At the height of the exercise, up to 70 jet fighters can be operating in the same airspace at one time. Typically, RED FLAG-Alaska conducts two combat missions each day.

All RED FLAG-Alaska exercises take place over Alaskan and Western Canadian airspace. The entire airspace is made up of 17 permanent military operations areas and high altitude training areas, plus two restricted areas, for a total airspace of more than 67,000 square miles.

Since its inception, thousands of people from all four branches of the US military, as well as the armed services of the Germany, Sweden, Canada, United Kingdom, Japan, New Zealand, Australia, Mongolia, and the Republic of Singapore, have taken part in Cooperative COPE THUNDER exercises. Last year, more than 2,000 people deployed to RED FLAG-Alaska, and participating aircrews flew close to 2,000 missions. In the past, aircraft involved include F-15s, F-16s, F/A-18s, EA-6Bs, OA-10s, A-10s, C-130s, KC-130s, KC-135s, KC-10s, E-3Cs, HC-130s, various helicopters and British Tornadoes, Nimrods, VC-10s and Jaguars as well as Army, Marine and Japanese Air Self Defense Force Stinger Teams.

Aircrews aren’t the only ones who benefit from the RED FLAG-Alaska experience. Exercises provide an operations training environment for participants such as unit-level intelligence experts, maintenance crews, and command and control elements.