TYNDALL AIR FORCE BASE – Tyndall Air Force Base’s last three F-15 Eagles lifted off and headed west Tuesday, as hundreds of base personnel and Bay County residents lined the edges of the base’s flight line to watch the end of an era.More than five months after the base’s first fighter jet departed, the result of an Air Force restructuring plan that called for the drawdown of Tyndall’s 48 F-15s, the last three jets took off for Edwards Air Force Base, Calif.

“The most difficult thing is we all love the airplane,” Chief Master Sgt. William Canfield Jr., superintendent of the 95th Aircraft Maintenance Unit (AMU), said minutes after the jets took off from Tyndall, as he talked about the AMU personnel who worked with the F-15s.Tuesday marked the formal inactivation of Tyndall’s 2nd and 95th Fighter Squadrons, which provided training to F-15 pilots. The first F-15, flown by Brig. Gen. Charles A. Horner, arrived at Tyndall in December 1983.

Col. Wesley Hallman, commander of the 325th Operations Group, talked about the F-15’s 27-year legacy at Tyndall and the culture of excellence attached to the aircraft.Hallman noted that, globally, F-15 units had tallied 104 air-to-air victories throughout the fighter’s history against zero losses. He also thanked the community members in attendance for their enduring support of the base.“We look forward to maintaining that close relationship as our mission evolves,” Hallman said.

F-22s In May 2009, Air Force officials released the fiscal year 2010 Combat Air Forces restructuring plan, calling for all 48 F-15 Eagles assigned to the 325th Fighter Wing to be retired.

Capt. Jon Kassebaum flew the first F-15 out of Tyndall on April 9 to Davis-Monthan AFB in Arizona, with the planes leaving the base since then at a rate of about two a week.

The 48 Eagles were reassigned to four different bases, with the Oregon Air National Guard, 173rd Fighter Wing in Klamath Falls, Ore., taking over as the primary location for F-15 pilot training.

Older F-15s will be used for various training and testing purposes, recycled for parts or placed in storage, according to Tyndall.

With the F-15s leaving Tyndall, the mantle would be passed to the base’s 43rd Fighter Squadron and its continued F-22 Raptor pilot training, Yancy said. Currently, Tyndall serves as the only F-22 pilot training base in the Air Force, according to the base.

In late July, the Air Force announced Tyndall was selected to receive an additional squadron of F-22 Raptors.

At that time, U.S. Rep. Allen Boyd, D-Monticello, said the first of the new F-22s would arrive at Tyndall toward the end of 2012. He said it would take about six months to get all of the F-22s on base.

Rep. Marti Coley, R-Marianna, called Tuesday’s F-15 departure bittersweet, and she said the base and the community could look forward to a new day with the arrival of more F-22s.

“It’s been a good thing for this particular base,” Coley said of the F-15’s presence at Tyndall.

On Friday, Yancy said he expected to stay at Tyndall for a couple of months before moving to a new position at the Pentagon. Yancy’s wife, Kris, walked with the departing lieutenant colonel to his jet and spoke with him briefly before he departed.

“It’s just sad to see it wrap up,” she said after the jets had departed. 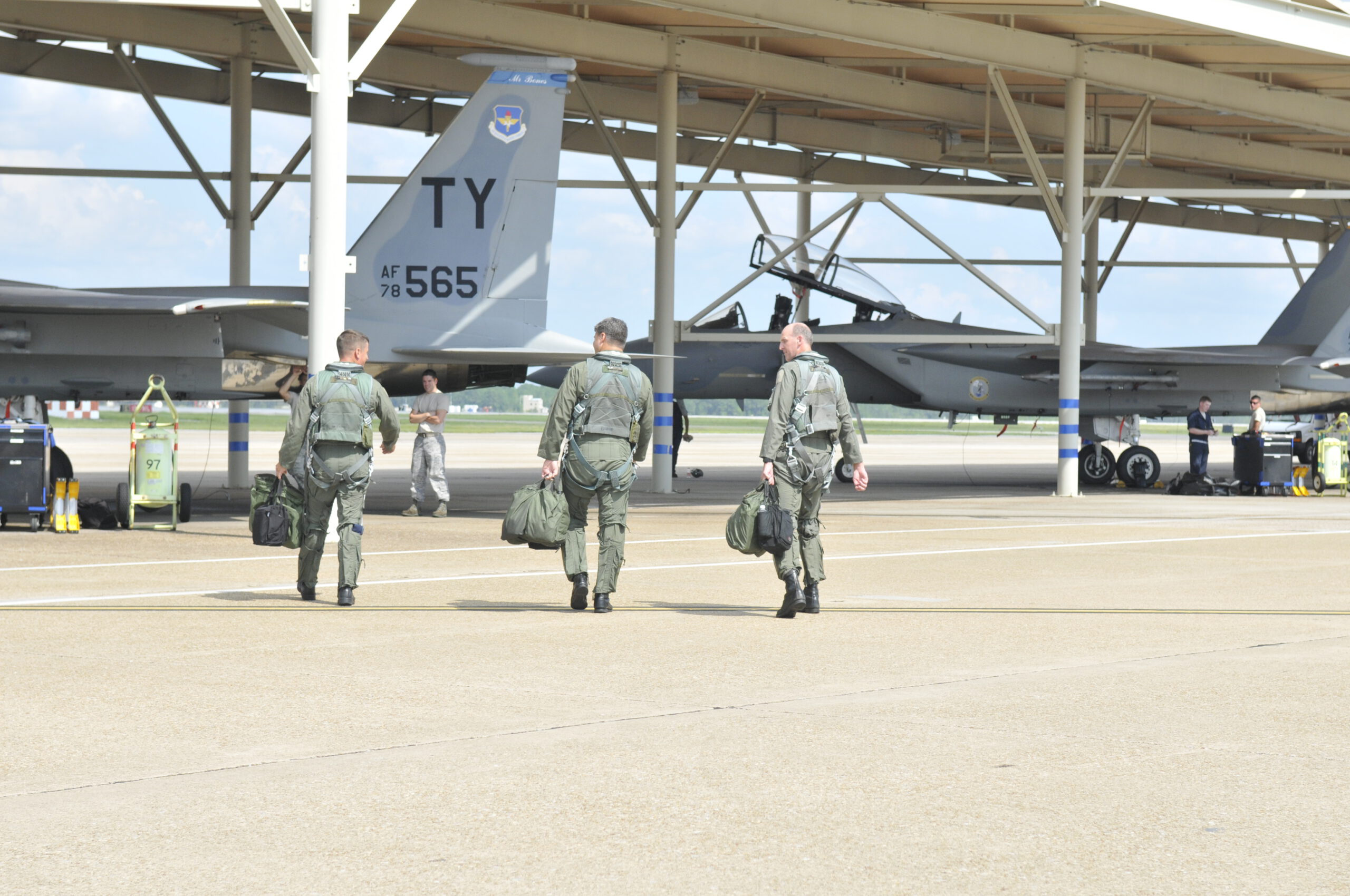