In 1975, the 71st moved to its current home with the 1st Fighter Wing at Langley Air Force Base, Va., where it was equipped with the F-15 Eagle air superiority fighter in 1976.

The 71st garnered numerous awards in its distinguished career. The 71st Fighter Squadron won the prestigious Hughes Achievement Trophy in 1999, 1993 and 1969, awarded annually to the most outstanding air superiority unit in the Air Force. The 71st received the Air Force Outstanding Unit Award and the Presidential Unit Citation on four occasions each. McDonnell Douglas Aircraft Corporation recognized the 71st in July 1991, for achieving 110,000 flying hours without a serious mishap.

In 1976 we assumed the name of “Ironmen”, originally as a result of our fist of mail, but more appropriately a result of our high standards and rigorous training. Numerous deployments, exercises, and aggressor visits have continued to demonstrate the capabilities of the 71st Tactical Fighter Squadron. As squadron knowledge of the F-15 increased, so did the performance of the Eagle, and in 1982 saw the the 71st become the first TAC squadron fully equipped with the factory new F-15C aircraft. Testing their new capabilities the Ironman deployed to the Soesterberg AB, the Netherlands from June 7th till June 23rd 1982, the 71 TFS Ironman deployed from Langley AFB to Soesterberg AB CORONET SIDEWINDER II. 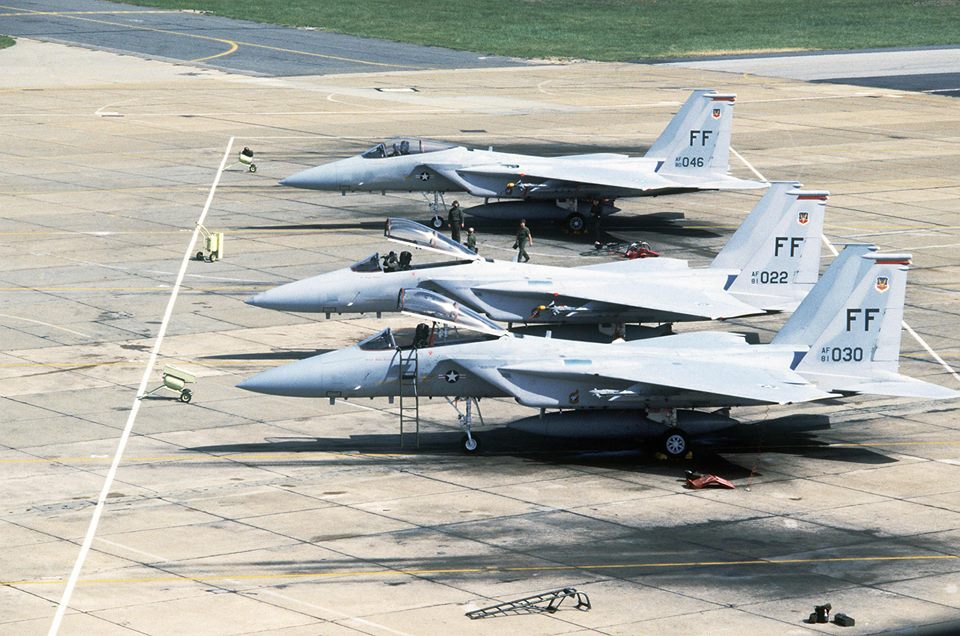 On 7 August 1990, the 71st deployed to Saudi Arabia as the first US combat force to land in support of Operation Desert Shield. Over the next 5 months, the Ironmen flew nearly a year’s worth of flying hours, over 13,000 hours and 3,300 sorties–all a prelude to war. In the early morning hours of 17 January 1991, while sweeping the skies of Baghdad, the 71st achieved one of the first aerial victories of DESERT STORM and we’re proud to say we helped pave the way for one of the most significant events in the history of the USAF: complete and total domination of an adversary. This feat was accomplished almost entirely by airpower, with the 71st flying 1091 missions and 5881 hours in six short weeks.

On 7 March 1991, the 71st redeployed to Langley AFB. Virginia for a long awaited rest and reunion. In May of the same year, the Ironmen received the McDonnell Douglas Safety Achievement Award for sustained outstanding performance in the field of flying safety.

Since the Gulf War, we have successfully supported Operation SOUTHERN WATCH and the 4044th Wing (Provisional) with four deployments to Southwest Asia. In 1992 we set the all time flying safety record for the F-15 with 124,790 hours of accident free flying. IRONMAN excellence continued after returning from the Gulf by being rated “Outstanding” on the ACC Inspector General’s Operational Readiness Inspection in April of 1993. Ending that same year, the squadron was recognized as the “Top Air Superiority Fighter Squadron in the United States Air Force” with the reception of the Hughes Trophy. In 1994, the local Air Force Association chapter honored the 71st with the Outstanding Operational Squadron Award. During the 1995 SOUTHERN WATCH rotation, the 71st broke numerous flying and maintenance records which set the stage for the Ironmen to win the Air Combat Command Maintenance Effectiveness Award in both 1995 and 1996. In 2002, the 71st Fighter squadron was awarded the coveted Hughes/Raytheon Trophy for Outstanding Aerial Achievement for a record 4th time!

9/2/2010 – LANGLEY AIR FORCE BASE, Va. — The last two operational F-15 Eagles soared out of Langley’s air space, destined for Portland, Ore., Sept. 1 as the historic Ironman squadron is scheduled to be inactivated Sept. 30.

The 71st Fighter Squadron, also referred to as the Ironmen, generated over 4,000 sorties and logged over 5,400 flight hours annually, while Langley Airmen were flying, repairing, fueling, and prepping the jets for every sortie.

Col. Matthew Molloy, 1st Fighter Wing commander said the inactivation of the 71 FW means a lot of things to the 1FW, but most importantly it means the end of a legacy.

“When the last wheels of the venerable Eagle leave the tarmac, it takes with it 34 years of airpower and an overwhelming record of 104 enemy fighters destroyed to zero F-15s lost,” said Colonel Molloy. “Without a doubt, the F-15s of Langley Air Force Base have left little question as to which aircraft is the combat proven, preeminent air superiority fighter.”

The F-15 aircraft are being sent to active duty bases within the United States, overseas and National Guard Bases. Like the aircraft, the majority of the pilots and maintenance personnel are being allocated to various bases.

“It’s pretty somber for all the personnel in the 71st,” said Maj. Greg Voelkel, 71 FS director of operations. “The 71st has a great history. Everyone is pretty proud to serve and be part of the squadron.”

Reassignment teams have come to Langley in order to place Airmen in locations where their expertise could best be utilized.

“The last couple of weeks we’ve been working with an assignment team, the team was here yesterday and today,” said Chief Master Sgt. Carlos Taylor, 71st Aircraft Maintenance Unit superintendent. “We have a few guys that will stay here and work on the Raptors at Langley, but 90 percent have been reassigned to stateside bases.”

Not only are the AMU Airmen being reassigned, but the majority of the pilots have been given new assignments as well.

“Of the more than 30 pilots with the 71st Fighter Squadron, seven will return to Langley to fly the F-22 Raptor after a three month spin up course at Tyndall,” said Major Voelkel.

Typically Airmen will not stay with a particular assignment throughout their military career, he added. Airmen leaving Langley will be assigned to different missions, such as becoming a liaison officer, or pilot training instructor. Major Voelkel said the biggest difference is it’s happening as all at once due to the inactivation.

“With the departure of the F-15s, the air superiority torch will be passed to the next generation of Air Force aircraft, the mighty F-22 Raptor,” said Colonel Molloy. “It is understood that the F-22 is still unproven in actual combat, but all indicators from our local training sorties to the Air Expeditionary Force deployments point to phenomenal potential. The 1st Fighter Wing stands ready to employ this aircraft in the same ‘first and finest’ standard as the F-15 Eagle. Until such time, the F-15 will remain the watchful champion from either afar or in fighting formation, and will reluctantly hand over the title to the F-22 with a simple ‘job well done.'”

Commentary by Capt. Lee Stewart
6/23/2010 – LANGLEY AIR FORCE BASE, Va. — Did you ever think the day would come when an Eagle would not be the most familiar sight in the Langley sky? Sadly, in the months to come, the very sight of an Eagle soaring across the Langley sky will soon become an uncommon phenomenon. Moreover, after a 34-year proud heritage, it is time for “the changing the guard” at Langley Air Force Base.

The mighty F-15 Eagle will step aside and allow the “new kid on the block,” the F-22 Raptor, to don the crown and set in motion a storyline that will someday solidify its own place in history.

The ending of an era began June 21 as the last squadron of F-15 eagles readied themselves for deactivation. The first two F-15 eagles, brandishing serial numbers 82-0024 and 83-0026, departed for their new home at Nellis AFB, Nev. These are two of four F-15s the 71st Fighter Squadron will transfer to the 433d Weapons Squadron at Nellis.

The remaining F-15s assigned to Langley will begin leaving over the next three months for new homes with the 18th Wing at Kadena Air Base, Japan, the 142nd Fighter Wing at Portland Air National Guard Base, Ore., and the 159th Fighter Wing at Naval Air Station New Orleans, La. The last aircraft should go “wheels up” mid-September, closing the final chapter in the 1st Fighter Wing’s F-15 history book.

The Eagle will truly be missed as part of the aircraft inventory here at Langley. In its maturity, the F-15 represented assurance and certainty for the 1 FW. When called, you could guarantee we would be there raring to go, ready to get the job done. Consequently, due to its venerable performance, the Eagle recently earned the joking nickname, “an aircraft without a mission.” It became the sixth man warming the bench, or the pinch hitter waiting in the dugout for a call that never came.

This absence gave maintainers and operators the opportunity to fine tune their skills both in the air and on the ground, posturing a team that was always ready. The skills of operators, maintainers and a touch of technology heightened by the quick recovery of the F-15 is what made this aircraft the most formidable air superiority fighter to date, and that is why this aircraft will be highly missed by all who have flown and or maintained it until the F-22 Raptor reaches full maturation.

And maintaining they did, as the 71 FS pilots achieved 100 percent of the 149 sorties allocated, flew 18 incentive sorties for assigned personnel, and certified three 4-ship leads and a mission commander, Cook said.

Throughout the exercise, the 71 FS integrated with the Jacksonville Air National guard in all aspects. Missions included defensive counter air, offensive counter air and dynamic targeting; however there was no delivery of live ordnance or actual target destruction, and all air-to-ground training was simulated.

“Our maintenance and support personnel worked side-by-side throughout the exercise,” Cook said. “In addition, our operators seamlessly operated together to include combined formations during the LFE exercises.”

“The Eagles are released from the Cage”

Eagle pilots and maintainers quickly responded to the announcement by Gen. John D.W. Corley, commander of ACC, that the Eagle was ready to soar again.

Lt. Col. Robert Garland, 71st FS commander, led the six-ship Eagle formation on its first flight in more than a month, reinstating the Ironmen as a lethal weapon for the United States.

“The Eagles are released from the cage,” said Colonel Garland. “The 1st Fighter Wing will once again have three combat mission ready fighter squadrons to utilize at a moment’s notice. We have been waiting 44 days for this announcement – we’re ready to get right back in the game.”

The pilots who lost currency due to not flying for several weeks will be expected to launch and land their jet with an instructor pilot in order to continue missions they flew prior to the stand-down. Although certain qualifications were lost, the Ironmen were able to spend more time on training – in and out of the classroom.

“Our pilots were able to work on academics during the stand-down, ensuring the most senior pilot and the newest pilot are on the same page to better our flying operations,” said Colonel Garland. “Although we weren’t able to fly, our squadron was able to maintain the same standards we always have.”

During the stand-down, maintainers were able to keep up with all of their training and requirements. The long weeks and hours maintainers put into the more than 20-year-old jets leaves little time for ancillary training or keeping up with their career development courses.

“It’s been an interesting month,” said Senior Airman Michael McCann, 1st Aircraft Maintenance Squadron crew chief. “We were willing to do whatever it took to launch our jets again.”

Since 1976, the Ironmen have led the way for other Air Combat Command F-15 bases, taking an active role in Operation Desert Storm and most recently Operation Noble Eagle.

“We knew it was important to maintain all of our standards here and launch as soon as we could,” said Airman McCann. “We want people to say, ‘If the Ironmen are launching, then the other F-15 bases are ready.’