In June 1995, the 125th converted to the F-15 Eagle, a fighter which adds air superiority capability to the Air Defense Mission.

The 125th Fighter Squadron has a dual mission – one state and one federal. The state mission is to provide trained and equipped personnel to protect life and property and to preserve peace, order, and public safety. The federal mission is to provide fully trained and qualified personnel to CINCNORAD in time of war or national emergency for the defense of the North American Continent. On a daily basis, the 125th is responsible for the maintenance of a NORAD Air Defense Alert site at Homestead ARB. In this capacity, the unit provides armed F-15 aircraft capable of intercepting, identifying, and, if necessary, destroying unknown aircraft which penetrate sovereign U.S. airspace. In the past, this threat has included Soviet Bear bombers, Cuban fighters, and narcotics traffickers.

Since conversion to the ADF-16, the 125th was the first operational NORAD Air Defense Alert, the first operational ADF-16 unit to employ the AIM-7 missile, the first ADF-16 unit to sit alert with the AIM-7, and the first unit to deploy to Howard AFB Panama, in support of JCS-directed operation CORONET NIGHTHAWK using enhanced identification tactics. In October 1995, the 125th became the first unit ever to complete a transition from one fourth generation fighter to another fourth generation fighter as it transitioned from the ADF-16 to the MSIP F-15. In April 1997, the 125th Fighter Squadron became the first Air Defense Unit to employ as Blue Air in an Offensive Counter Air role, integrated with an active duty unit, during a flag exercise.

The unit was rated “Outstanding” during an Alert Force Evaluation by the North American Air Defense Inspector General in November 1997. This was the highest rating ever given by NORAD. In January 1998, the 125th Fighter Squadron received an “Outstanding” on its Operational Readiness Inspection.

The unit also operates a C-26B in support of state and federal law enforcement agencies.

Detachment 1, 125th Fighter Squadron, is responsible for the maintenance of a NORAD Air Defense Alert site at Homestead ARB.

In this capacity, the unit provides armed F-15 aircraft capable of intercepting, identifying, and, if necessary, destroying unknown aircraft which penetrate sovereign U.S. airspace. In the past, this threat has included Soviet Bear bombers, Cuban fighters, and narcotics traffickers.

The FANG was the first Air National Guard unit to deploy to Laage, located north of Berlin, in what was once a Communist Bloc Air Force Base, to fly against one of Germany’s most sophisticated aircraft.

The deployment was designed to teach pilots how to successfully engage and win battles against the MiG-29 FULCRUM. The FULCRUM is one of the most advanced and maneuverable fighters in the world and is employed by many nations with hostile intentions toward the United States; in fact, American forces engaged the MiG-29 in both Iraq and Bosnia. The unit now has more sorties against the FULCRUM than any other American unit.

This deployment presented a unique opportunity to “combat season” FANG pilots against the sophisticated MiG aircraft during a peacetime environment. 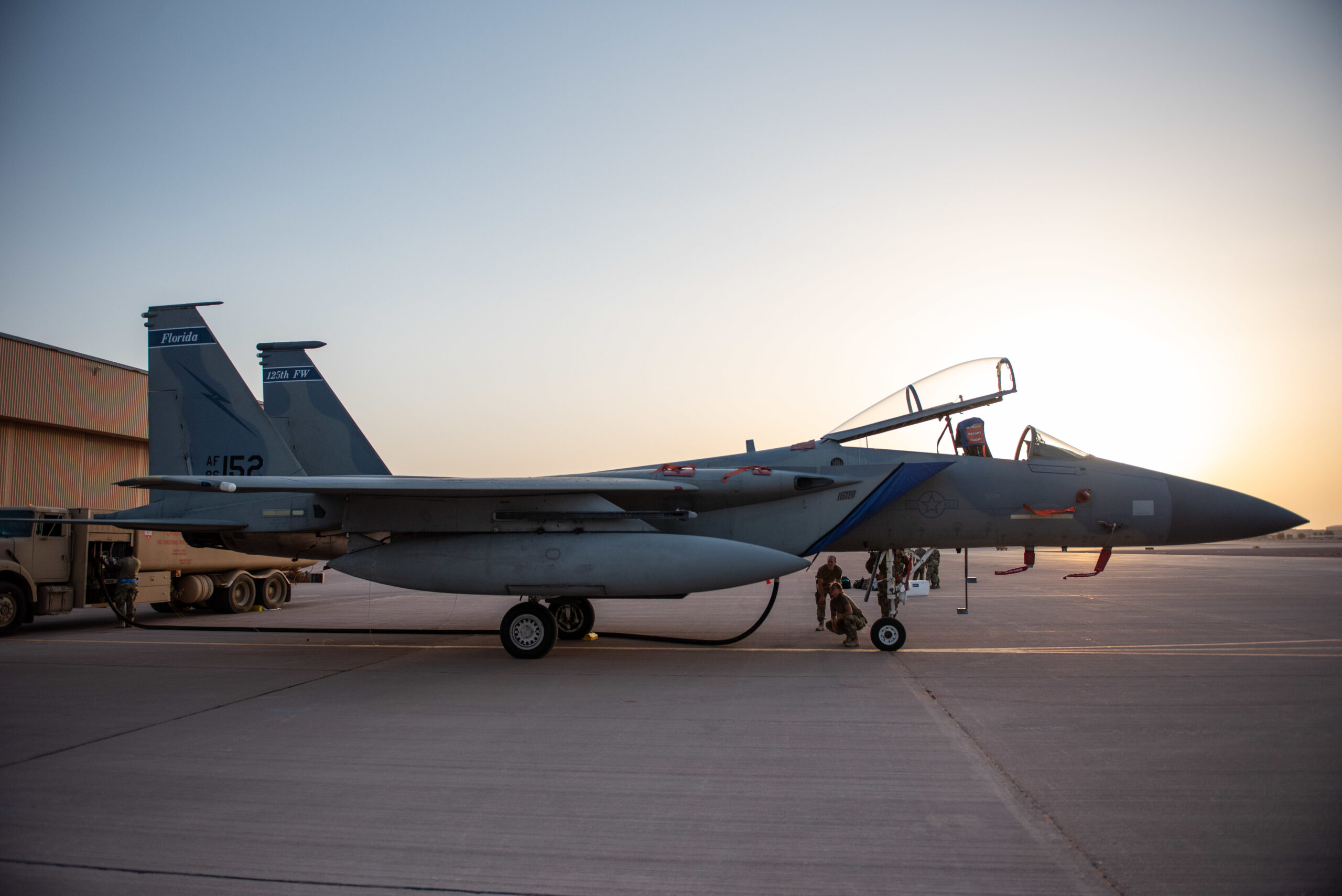 “It offers an opportunity to operate out of different airfields, expand our tactical and strategic reach, and partner with other nations for overall common missions,” said Maj. Joseph “Bodhi” Pasko, 159th EFS pilot.

PSAB currently has a small U.S. military presence. According to Pasko, the team remained flexible to accomplish the mission under any conditions.

“The exercise is important because it challenges our ability to move with flexible options throughout the area of operations,” said Pasko.” It proves that we can operate our aircraft out of different airfields in support of our missions and objectives and to strengthen those ties with other nations that we are working with toward our common goals.”

The Air Base Opening Group, primarily out of the 621st Contingency Response Wing from Joint Base McGuire-Dix-Lakehurst, is building facilities for an Air Expeditionary Group to support U.S. forces that will operate out of PSAB.

“These exercises help us prepare to better organize, train and equip to keep our adversaries on their toes,” said Col. Brad Hall, ABOG commander. “One of the things that separate the U.S. military from other militaries is our ability to rapidly deploy and execute our mission.”

In July, the Secretary of Defense authorized the movement of U.S. personnel and resources to deploy to Saudi Arabia. PSAB was last used by U.S. forces in 2003.

2/10/2010 – MIAMI (Feb. 9, 2010) — At the biggest sporting event of the year the Florida — Four F-15 Eagle fighter jets from the 125th Fighter Wing roared over Sun Life Stadium at the beginning of Super Bowl XLIV on Sunday, Feb. 7, flying in a perfect formation as singer Carrie Underwood finished her rendition of the National Anthem. “It was awesome!” said Lt. Col. John “Homer” Black, lead F-15 pilot for the Super Bowl flyover. “It was an honor to even be chosen to do this.”

This was the first time an Air National Guard unit performed the prestigious Super Bowl flyover. Black and his wingmen – Col. Bill “Yogi” Bair, Col. Bob “Squirt” Branyon and Lt. Col. Mike “Speedo” Rouse – took off from their base at the Jacksonville International Airport in North Florida about an hour before kickoff and flew in a holding pattern above Miami until the beginning of the National Anthem. While keeping in constant radio contact with an Air Guard ground crew at the stadium, the jets blasted through the South Florida twilight high above the pre-game show. “I was the only one looking forward so I’m the only one who had a pretty good view of what was going on,” Black said, describing the approach over the stadium. “The other guys are just basically looking at me…At about a mile and a half out I could recognize Carrie Underwood on the big (screen).” With afterburners glowing orange in the darkening sky, the jets brought a surge of applause and cheers from the crowd, and even drew a big smile from Carrie Underwood on the center stage. “We just wanted to make the formation look perfect,” said pilot Bair after the successful flyover. “Representing the Air National Guard in one of the biggest venues in the world was awesome! As we were coming across the stadium we could hear the people screaming and see the flash bulbs going off. It was something I’ll never forget.” After the jets landed safely at nearby Homestead Air Reserve Base, the pilots were brought back to the stadium by helicopter and invited onto the field to watch legendary rock band The Who perform the halftime show. Later in the third quarter the Florida Air National Guard pilots were officially recognized on the field – again drawing applause and cheers from the pumped-up football fans.

The Air Guardsmen were again present on the field after the game as Super Bowl winners the New Orleans Saints received the Vince Lombardi trophy amidst showers of confetti and shouts of “Who Dat!!” from jubilant Saints’ fans. Following several photo-ops with players and cheerleaders, the Airmen left the stadium to a peppering of cheers and applause from lingering fans. “I’ve had a pretty incredible 20 years between the Florida Air National Guard and my time in the active duty Air Force,” Black said, “And to have this happen to me toward the twilight of my career is something that I’ll carry with me forever.” 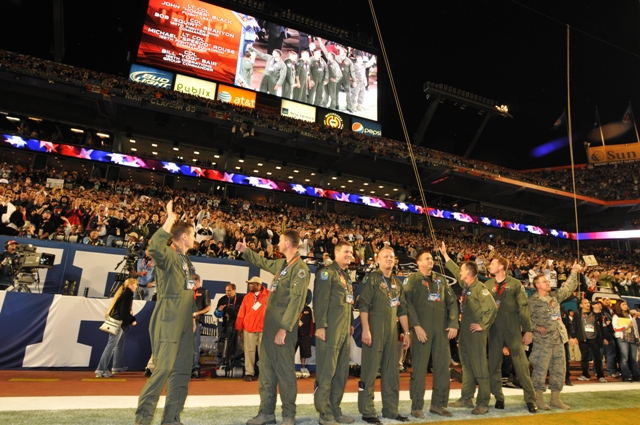