The 318th Fighter Interceptor Squadron was stationed at McChord AFB in Washington State. The 318 FIS converted from F-106A’s to F-15A/B’s in 1983. The mission of the 318 FIS was Air Defense of the North-West of the United States and Canada. F-15s of the 318 FIS stood alert at Castle AFB, CA as 318 FIS detachement 1.  The 318 FIS,det 1 was activated on Oct 1, 1981 and deactivated in 1989 shortly before the 318 FIS stood down at McChord AFB. In 1989 Air Force Officials announced their intentions to inactivate the 318th FIS and transfer the units F-15’s to Oregon Air National Guard’s 123rd FIS / 142d FIG who would also  take over the 318th air defense responsibilities in the Northwest. On May 24, 1989 the first F-15 to leave McChord, landed at Portland International Airport to begin the units new assignment in the Eagle.

In November of 1989, two F-15 Eagles from the 318th FIS flew east to engage in the Squadrons last battle, aerial combat with two F-16’s from Montana ANG. This battle ended as most did for the 318th, a Green Dragon victory. The F-15’s were flown home and after dismounting their fighters pilots Lt. Col Chuck Colgrove, and Lt. Col. John Kugler, Commander,  were given a ceremonial wetting down by their squadron mates. The Colonels each opened a bottle of champagne in a toasted to all present and former “Green Dragons”. On December 7, 1989, the 318th colors were sheathed for the last time and the unit was deactivated. 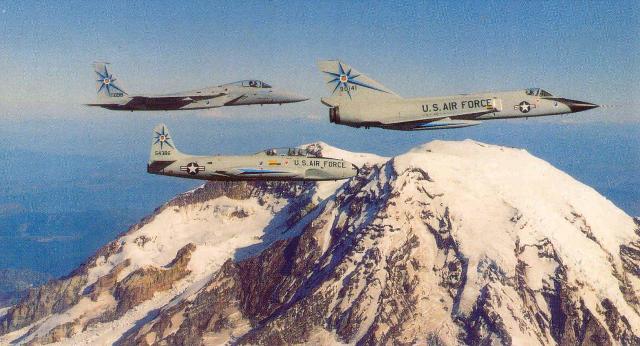 F-15, T-33, & F-106 flying over Mt. Rainer, WA (Picture donated by gary H. Price / McChord Air Museum)(I am looking for more information, any information like squadron rituals, flying anecdotes that you would like to donate please contact the webmaster using on the contact me page)