From mid 1996 to earl 1997, the 44th upgraded their F-15s with night vision imaging system (NIVS), becoming the first active duty Air Force unit with NIVS. This modification allows 44th FS crews to use the Night Vision Goggles without being blinded by the bright white lights of the cockpit at night. The 44th FS Eagles wear the ZZ tailcode with a black tail stripe.

9/29/2014 – KADENA AIR BASE, Japan — September 29, 2014, marks an anniversary for arguably one of the most effective, battle-tested and world-feared pieces of equipment to join the Keystone of the Pacific’s full-time arsenal.

When the Eagle’s wheels first touched Kadena’s flightline in the fall of 1979, F-15C and D models were still fresh off the production line. But like so many seasoned veterans, the Eagle and the Okinawa squadrons that flew them have had to adapt to counter the ever-changing threat over the years.

While most people don’t maintain a personal vehicle for more than 10 years, the Air Force maintainers and operators here have ensured the safe operation of the airframe throughout the years with countless thorough inspections and repairs.

At Kadena alone, the F-15C/D squadrons have earned the title of best Air Force fighter squadron of the year and the prestigious Raytheon Trophy, formerly the Hughes Trophy, nine times since the aircraft’s arrival.

For three and a half decades, the Kadena-stationed F-15C Eagle, a twin-engine, air superiority fighter jet, has maintained a prominent presence within the Asia-Pacific region and an indisputable role in Air Force mission security around the globe.

With a perfect record of more than 100 confirmed kills and no combat losses in operations and contingencies ranging from Turkey and Bosnia to Iraq and Afghanistan, the Eagle has proven itself time and again. The jet is responsible for 34 of the 37 Air Force air-to-air victories in Operation Desert Storm in 1991.

“The plane itself is amazing,” said 1st Lt. Lance Coldren, 67th Fighter Squadron historian and F-15 pilot. “It’ll always take you to war and bring you back – the 104-0 combat record proves that. Since Korea, there’s never been an American ground troop attacked by (enemy) aircraft because of our air superiority, and the Eagle has been a part of that since it entered service.

“I think it’s really cool to fly such an old jet that was built … and designed before I was born, and it’s still prevalent today,” Coldren said. “It’s still one of our forefronts of our air superiority today. I like the mission … It’s fun, challenging, exciting.”

Much like the aircraft’s predecessor, the F-4 Phantom, which was upgraded several times before being retired, the Eagle advanced a few of its own major components – the central computer, a Programmable Armament Control Set, and of course radar, which received another round of upgrades this year.

“It was called the 18th Tactical Fighter Wing in 1979 … The first were assigned to the 67th, 44th, and 12th Fighter Squadrons and replaced the F-4C Phantoms,” said Casey Connell, former 18th Wing historian. “It had better range, avionics and air-to-air capability.”

However, as it replaced F-4 before it, so too will the Eagle see the end of its career someday – after all, it’s already older than most junior enlisted Airmen and young NCOs that maintain it. Though the longevity is an obvious testament to the original aeronautical engineers who designed the jet and maintainers who repair it today, it’s still only a matter of time before the new generation of multi-role fighter jets replaces F-15s for good.

It’s apparent Eagles have already left behind a prevalent airborne history. Until the day it says goodbye to the Pacific and retires, the jet will continue to take to the skies alongside other U.S. Department of Defense and allied nations’ aircraft.

Awarded annually since 1953, the Raytheon trophy is awarded to the top air-superiority or air-defense squadron in the Air Force. Units are not only evaluated on operational mission performance, training and organization as a whole, but also individual achievements, awards and unit incentive programs.

The 44th FS closed out the year with more than 3,000 sorties, logging more than 5,000 hours of flying; and also provided air superiority for 11 countries across three continents.

“I would just like to thank all the Airmen for their professionalism, hard work and sacrifices that ultimately made this award possible,” said Lt. Col. David Eaglin, 44th FS commander. “The 44th FS was deployed for over 290 days, and that kind of operation tempo can take a toll on our Airmen and their families. To their credit, no one ever complained. They just packed a bag, suited up and did what they were asked to do.”

In 2012, the squadron did more for global United States’ interests both at home and abroad than any other fighter squadron in the world.

During the year, the squadron proved they were the best not only as a whole, but individually as well. Airmen from the 44th FS were awarded various awards: Bronze Star, Air medals, Air Force Commendation medals and Air Force Achievement medals.

“They have set themselves apart as dominant air superiority warriors,” said Carlisle. “Their long legacy, from flying some of the first sorties on Dec. 7, 1941, to combat sorties in U.S. Central Command, have proved them worthy to join the long line of excellence that spans 57 years of Raytheon trophy competition.”

6/25/2009 – ELMENDORF AIR FORCE BASE, Alaska  — Northern Edge 2009 is a joint training exercise connecting approximately 9,000 servicemembers from throughout the country and throughout the world, and involving more than 200 aircraft. Some of those service members and aircraft came from as far away as Kadena Air Force Base, Japan.

Pilots and maintenance personnel from the 44th Fighter Squadron and the 44th Aircraft Maintenance Unit made the trip to the ‘Last Frontier’ to participate in the largest military training exercise in Alaska, June 15-26.

The 44th FS, known as the “Vampire Bats,” brought 12 of their F-15 Eagles to add their own “sound of freedom” to the Alaskan skies. During the exercise, the ‘Bats have the opportunity to train alongside Navy and Marine Corps F/A-18 Hornets, F-22 Raptors and C-17 Globemasters.

“It’s a great opportunity to work with other units, other platforms,” said Capt. Michael Kuehni, a F-15 pilot with the 44th FS. “We have the Air Force, Navy, Marine and Army working all together to achieve a common objective.”

The pilots of the 44th FS will train in counter-air operations, close air support, and air interdiction of maritime targets during the two-week exercise. The overall focus of Northern Edge is to prepare each of the services to respond to a crisis in the Asia-Pacific region.

Northern Edge also gives the pilots of the 44th FS the chance to see how well the different services work together and the strengths and weaknesses that each service brings to the table in different situations, according to Kuehni.

“Its pretty impressive getting to work with all the services,” said Master Sgt. Eric Butts, the maintenance project officer for the 44th AMU. “I’ve worked with a lot of Marines and a lot of Navy guys so far to help create the whole process. Just to have the opportunity to bring all 12 F-15s that we brought, plus the 120-body maintenance package, has been an absolutely fantastic time so far. It’s been a good experience.”

Northern Edge provides a great training experience for many of the young Airmen that the 44th AMU brought with them, according to Butts. The operational tempo of the exercise means the Airmen get a lot of hands-on maintenance time on the aircraft to make sure they are always ready to fly.

“We brought quite a few new guys on this trip,” said Butts. “Most of them, this is actually their first (TDY, and it’s good for them to actually see what it actually takes to put the mission together.”

The young Airmen on the line making sure their aircraft are ready to answer the call appreciate the opportunity to be part of something as large as Northern Edge. 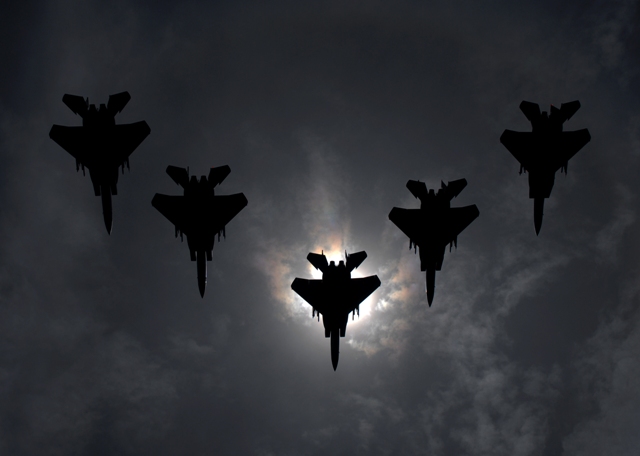 A flight of F-15C Eagles from the 44th Fighter Squadron, Kadena Air Base, flies during a total solar eclipse over the island of Okinawa, Japan July 22, 2009. The eclipse was a rare opportunity for service members stationed here to witness this unique event. (U.S. Air Force photo/Airman 1st Class Chad Warren)