Almost every F-15 squadron based outside CONUS and every Fighter 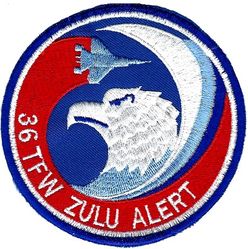 Interceptor Squadron in the States ran a Zulu Alert. A Zulu Alert consists of two and sometimes four, like at Bitburg AB, fully armed F-15’s with full tanks all cocked up ready to go airborne 24 hours per day, 7 days a week. Usually there would be an Alert Facility at the end of the runway. Here the jest and their crew were ready 24 hours per day and waited for the signal to go. Within a couple of minutes from the time the call came the F-15’s would be airborne this could be a training sortie, a plane is distress that needs help or the real thing. Once the Eagles were airborne they would usually fly through a pre-arranged corridor. In this corridor they are not restricted to anything and were able to go as fast as needed without the fear of a mid-air collision. During this time they would get their “target” info either from ATC or an airborne AWACS and directed to the possible threat. When the threat was real it was usually a TU-95 Soviet nuclear bomber on a training sortie testing the U.S and NATO Air Defences. Most of the times the encounters were friendly the F-15’s picked up the soviet bomber and escorted it away from U.S./NATO airspace. But there are different stories one of the 57th FIS  (NAS Keflavick) were the soviet Bomber crew flew extremely low trying to run the F-15’s into the ocean. Or that the soviet bomber would turn into the F-15’s. One of the busiest squadrons during the cold-war was the 57th FIS at Keflavick, taking the bulk of the TU-95 intercepts. With the ending of the Cold War in the late 80’s did not mean that the Tu-95’s stopped trying to fly into U.S. and NATO airspace. During the late 90’s when tensions between CIS and NATO rise about the “Allied Force” campaign against Serbia, two TU-95 flew within striking distance of the U.S. but were turned back by F-15’s from the 122nd FS Louisiana ANG.

Another unusual intercept occurred on the 4th of July 1989 when a MIG-23 entered West-German airspace and continued in a straight line towards the Netherlands. Immediately two F-15’s from the 32nd TFS stationed at Soesterberg AB scrambled to intercept the MIG-23. When the F-15’s caught up with the MIG-23 and started to escort the MIG out of NATO airspace they saw that he pilot had ejected from the airplane and that the MIG was flying on it’s own. After it was impossible to chance the MIG’s flight path the F-15’s kept escorting the MIG until it ran out of fuel and crashed on a farm near the Belgium coast. Killing one person inside the farmhouse.

Still today USAF F-15’s are ready and on zulu alert all around the world at place like Kadena AB, Japan. RAF Lakenheath, U.K. but also in the United States as a result from the terrorist attacks on N.Y.C and Washington D.C. F-15’s patrol the U.S. skies “Noble Eagle” ready to intercept any unidentified aircraft.