The 53rd TFS started flying F-15’s at Bitburg AB in 1977.  The 23 aircraft for this first operational squadron left Langley on 27 April 1977 for a mass Atlantic crossing. Over the following months the aircraft for two other squadrons (22nd TFS and 53rd TFS) arrived. The 36th TFW’s full strength of 79 fully-operational F-15As was reached in December 1977. Project Ready Eagle was completed in precisely one year. In 1980 more advanced F-15Cs and F-15Ds would replace the original F-15As.

Throughout the 1970s and 1980s, the 36th TFW conducted routine training missions from Bitburg Air Base, however the outbreak of the 1990-91 Gulf War put the F-15s of Bitburg into the heart of the conflict.

During the next six weeks, until the cease-fire, 53rd TFS aircraft flew around the clock, protecting two strikes per day and one strike each night. PROVEN FORCE strikes targeted military airfields, nuclear and chemical facilities, communications centers, power plants, and oil refineries and storage facilities in northern Iraq. By the middle of February, PROVEN FORCE was attacking Baghdad. In addition to protecting strikers, the 525th FS was frequently tasked to man barrier caps in eastern Iraq to destroy Iraqi fighters attempting to flee to Iran. These missions, often lasting in excess of five hours, required aircraft to operate over 150 miles (240 km) behind enemy lines without any support assets.

The 36th TFW’s pilots, support personnel and aircraft performed magnificently in Operation Desert Shield, Operation Desert Storm and Operation Provide Comfort. Not a single F-15C aircraft was lost in combat during the war. On 13 March 1991, the deployed 53rd TFS returned to Bitburg in victory.

arrived at Spangdahlem. On 03 January 1995, two members of the 53rd Fighter Squadron became the first two U.S. Air Force pilots to fly an unrestricted, military sortie over the former East Germany in more than 45 years. Lt. Col. Michael P. Fennessy, squadron commander, and Capt. Craig R. Jones, squadron flight leader, were conducting a NATO Quick Reaction Alert training mission in F-15C Eagles. They entered the former East Germany by flying past Fulda, then proceeded to their training area over Leipzig. “They exercised with German ground controllers to improve the NATO command and control structure in the region. In the summer of 1994, Allied Air Forces Central Europe, one of the three NATO military subordinate commands, tasked the 53rd FS to provide aircraft and flight crews capable of responding to unidentified aircraft in NATO airspace. As a result of German reunification on Oct. 3, 1990, the new AIRCENT “Zulu” alert area of responsibility extended eastward to the Oder and Neisse Rivers, the German-Polish border.

The 53rd Fighter Squadron stood down in March 1999.

About 1,500 people were on the ramp of Hangar One 10 March 1999 for the inactivation ceremony of the last U.S. Air Force NATO Tiger unit. The 53rd Fighter Squadron’s inactivation, effective March 31, came as a result of a force structure realignment of the U.S. Air Forces in Europe to comply with a 1996 Combat Air Forces decision to return fighter squadrons to a standard size of 24 primary assigned aircraft. This was an increase from the current level of 18 PAA.

The 53rd FS NATO Tigers maintained a phenomenal pace despite the black cloud of the impending inactivation. In less than two years, the squadron deployed to, and operated from, nine countries on three continents, and accumulated more than 11,000 flying hours supporting both contingency and training operations.

Below photos of the deployment during Desert Shield/Storm to Al Kharji AB 1990-1991. All photos donated by Jiffy Jeff Brown. 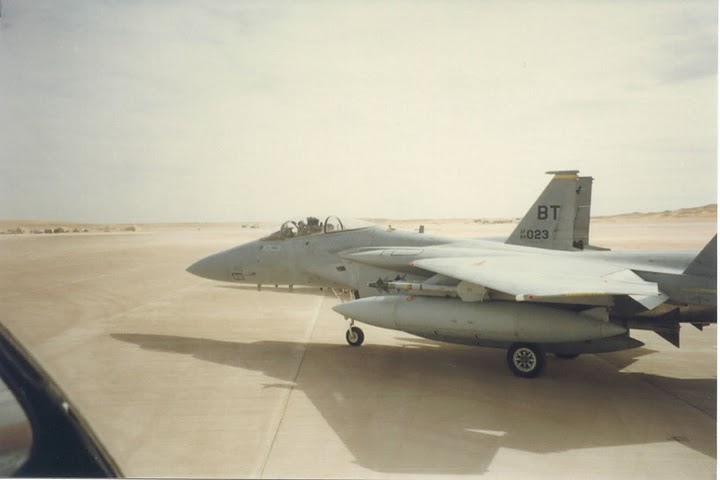 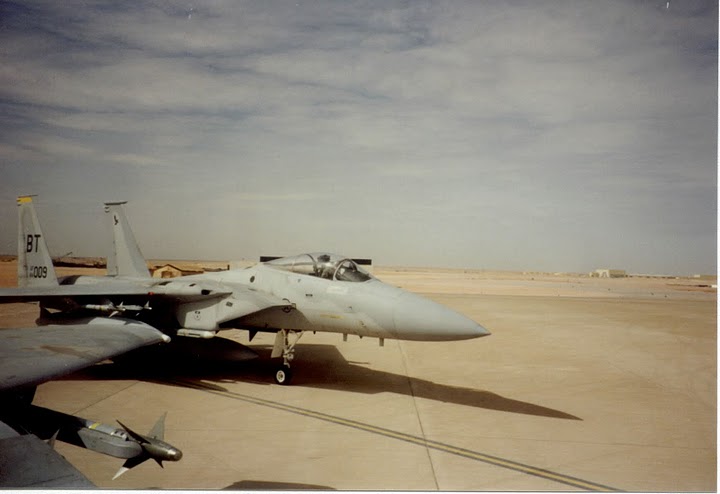 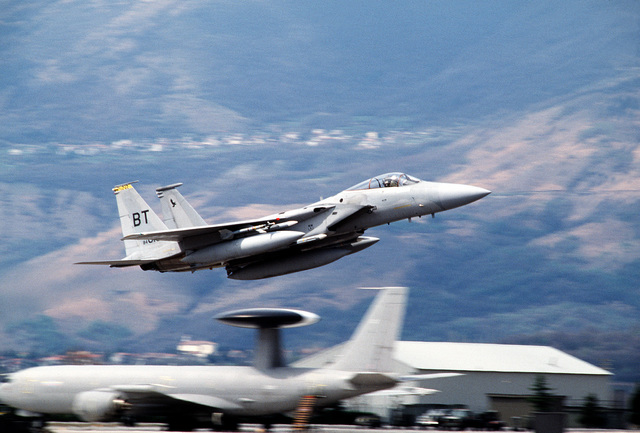 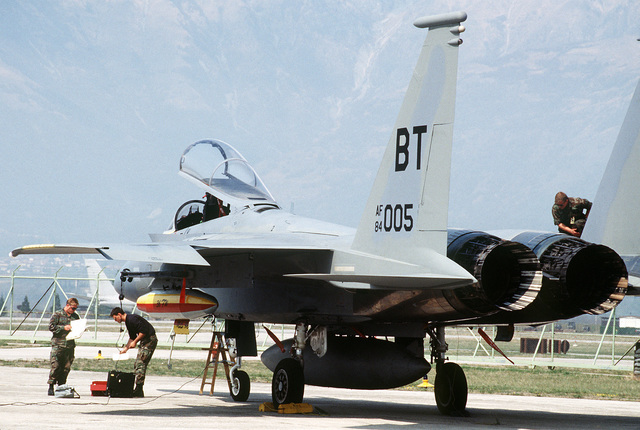 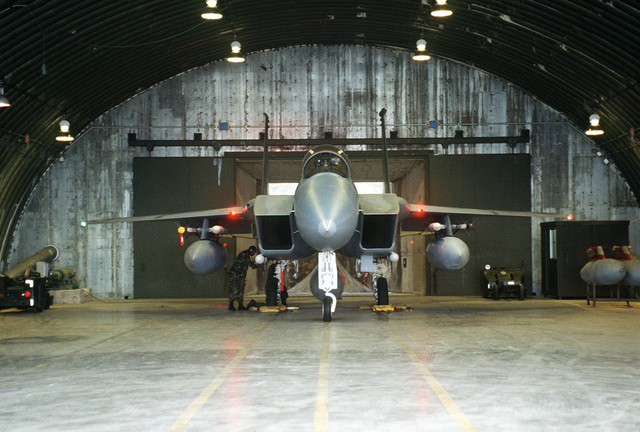 Technicians make final checks on an F-15C Eagle aircraft as Lt. Shaffer of the 53rd Fighter Squadron prepares to start the engines prior to a sortie during Operation Deny Flight

All photo’s taken and donated by Dave Pilsworth. 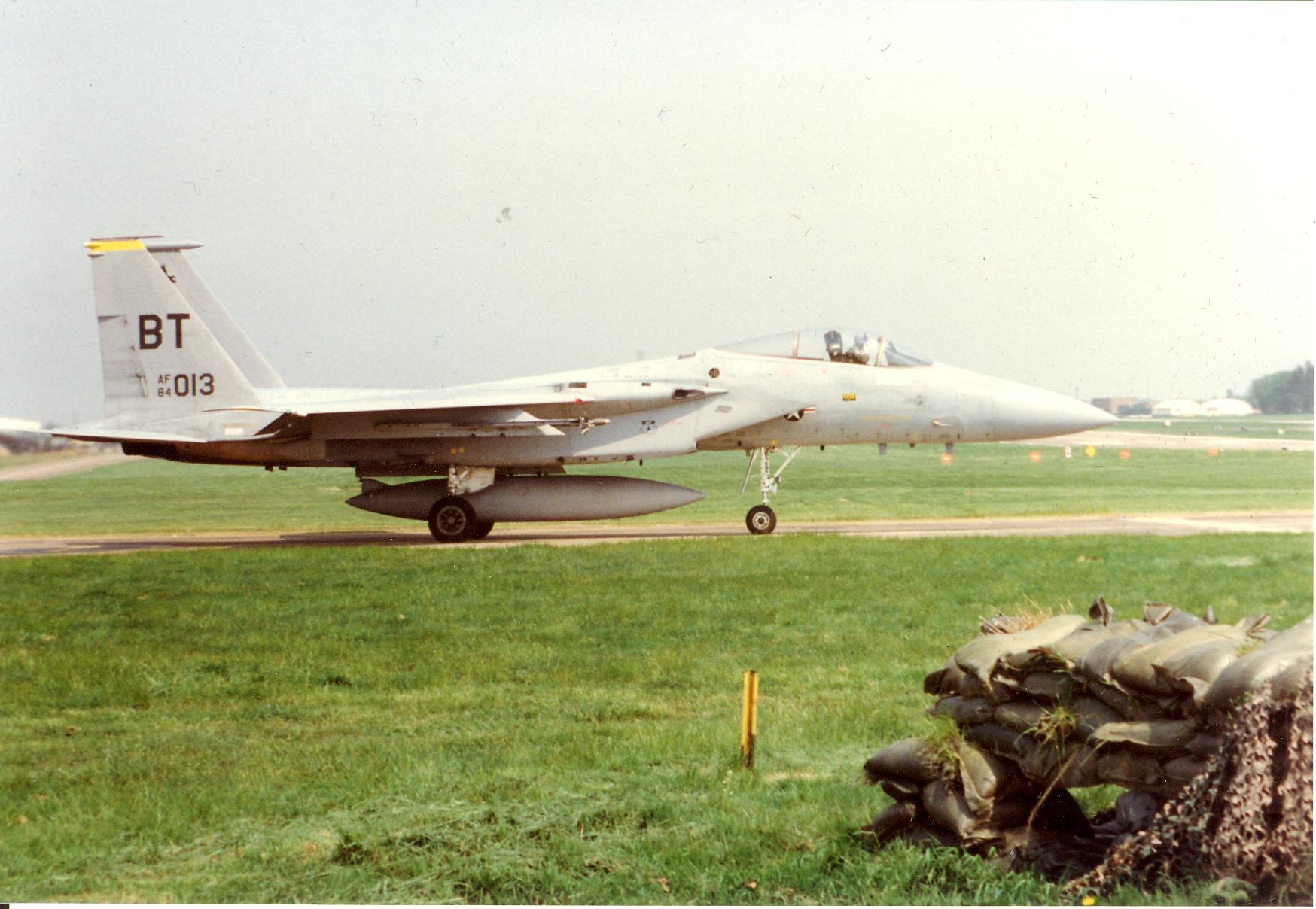 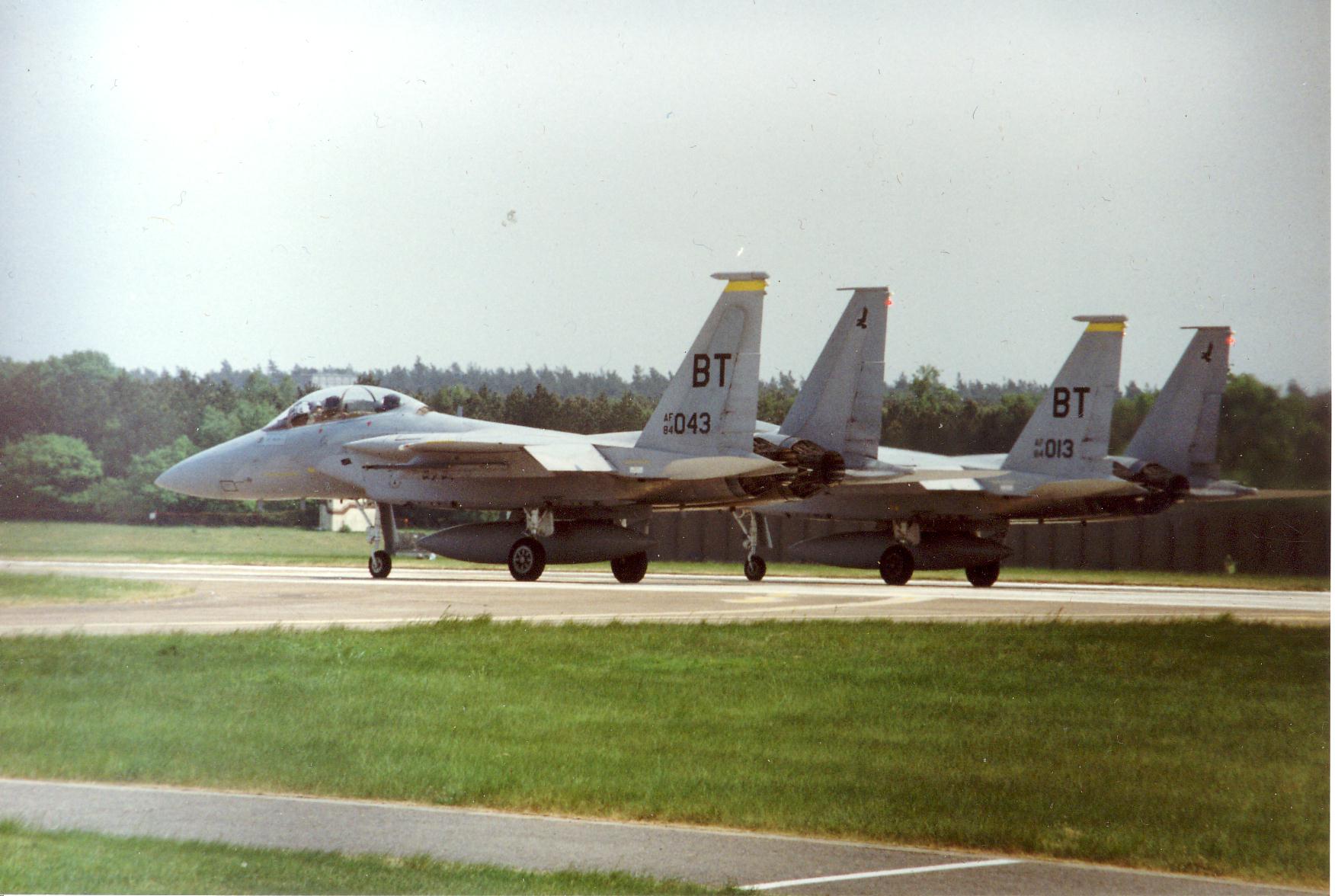 Tigers squadron exchange in Orange / Caritat in November of 82

LtCol “Rowdy” Lewis was the OC … third from the left.  Front row below the star Robert “Scout” Winebrenner, with Alan “Mouse” Muise to his left, other unknown (photo donated by Robert ‘Scout” Winebrenner).