While in the U.S. Air Forces in Europe Area of Responsibility, the 104th FW will support the NATO Air Surveillance mission in Iceland as part of a Theater Security Package in support of NATO alliance commitments.  The unit will also deploy to Leeuwarden Air Base, Netherlands, and other European NATO and partner nations. 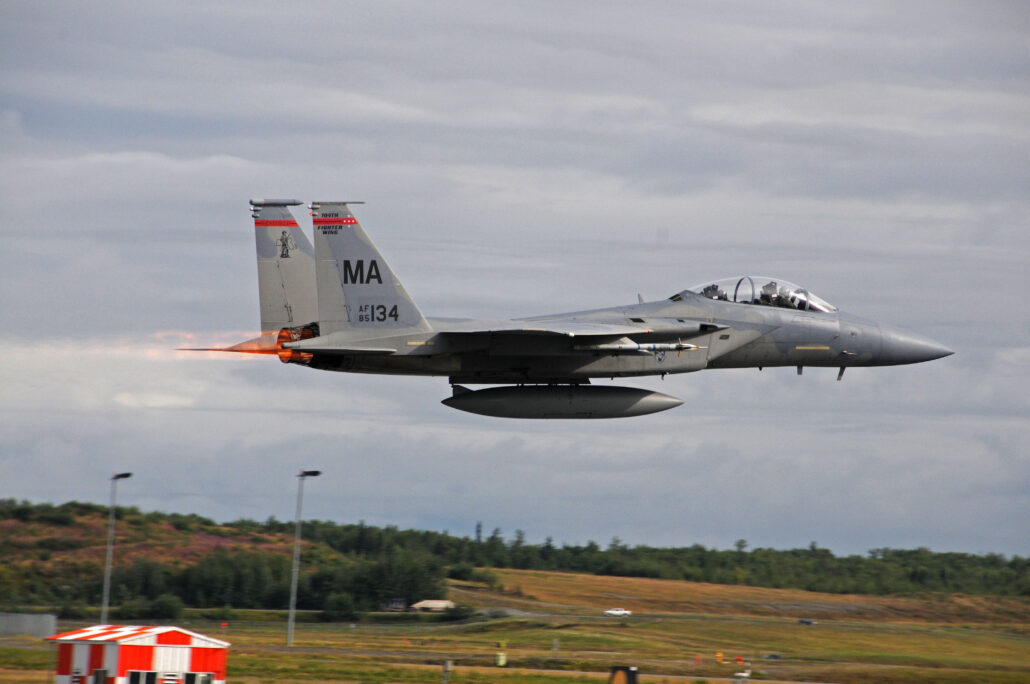 The unit will conduct training alongside our NATO allies and partners to strengthen interoperability and to demonstrate U.S. commitment to a Europe that is whole, free, at peace, secure, and prosperous.

“As Citizen Airmen we continue to support the National Security both home and abroad with partner nations and allies,” said Col. James Keefe, Commander of the 104th FW. “Our Guardsmen are on duty accomplishing missions they train for every day at Barnes and are an enduring choice for security cooperation and building partnerships. Our defense relationships with allies like Iceland are critical to ensuring security for the United States and NATO.”

The Air National Guard has enduring long-term relationships with countries with similar values and interests, paramount for meeting defense goals in today’s global environment. The 104th FW Air Guardsmen provide critical support throughout the USAFE AOR by deploying and interacting with a variety of nations.

We represent America’s forward presence, standing alongside our proven, indispensable European allies and partners. Together, we are ensuring our security, protecting our global interests, and bolstering our economic bonds. We are able to maintain a global presence thanks to the combined efforts of our active duty, National Guard, and Reserve Forces.

The 104th FW is an operational flying unit assigned to the Air Combat Command, and proudly claims the honor of being one of the oldest flying units within the Commonwealth of Massachusetts. Recently the 104th received “Air Control Alert Unit of the Year” by the Continental U.S. North American Aerospace Defense Command Region – 1st Air Force (CONR-1AF/AFNORTH).  A component of the North American Aerospace Defense Command (NORAD), the Continental U.S. NORAD Region (CONR) provides airspace surveillance and control and directs aerospace control activities for the continental United States (CONUS).

Tasked to provide operationally ready combat units, combat support units and qualified personnel for active duty, the 104th FW supports Air Force wartime contingency requirements and performs a variety of peacetime missions required by the Air Force and compatible mobilization readiness. One mission of the 104th is Aerospace Control Alert (ACA), providing armed fighters ready to scramble in a moment’s notice to protect the Northeast from any airborne threat. The unit is responsible for protecting a quarter of the nation’s population and one third of the Gross Domestic Product

END_OF_DOCUMENT_TOKEN_TO_BE_REPLACED

“We are exercising the ability to fly a massive amount of sorties in a short amount of time, and preparing our pilots for operations that are outside the norm, so that they are ready in a stressful environment, to go out and execute the mission they’ve been trained to do,” explained Lt. Col. Jason Zumwalt, 493rd Fighter Squadron director of operations.

On a typical day, one fighter squadron flies 14 sorties each, lasting about an hour and a half. But, this month, squadrons are scheduled to fly up to 54 sorties in one day.  During this time, instead of shutting down the jets after the morning and evening sorties, each jets will be refueled twice, allowing pilots three opportunities to better hone their skills.

“It’s a great experience for the pilot to stay in the jet, get refueled and do it again,” Zumwalt said. “The sorties are exhausting, and this training pushes pilots further, testing their limits, so they are ready at a moment’s notice and can successfully accomplish the mission. Your typical pilot may get between nine and 12 sorties a week, and, on average, that’s how many pilots get in a month.”

Zumwalt explained that this surge in training allows pilots to practice executing difficult maneuvers with precision.

“A good example is a break turn,” Zumwalt explained. “It’s a defensive or offensive hard turn, high-g maneuver to turn the aircraft very rapidly. Now, I can go out and do three of those in a single sortie or I can go out and do 12 of them in a single day. What you’ll find is that, during that day, it’s a lot of muscle memory, and by hitting it all at once we are able to zero in on the perfect spot for execution.”

The Liberty Wing and surrounding community communities can expect to hear more jets in the sky during the coming weeks. For every aircraft the Liberty Wing puts in the sky, there is a lot of work that goes on in the background and a lot of beneficial training that prepares our Airmen for future operations. Training consistently and occasionally pushing the limits keeps everyone on the ground and in the air Forward, Ready, Now

Fourteen of the 4th Fighter Wing’s F-15E Strike Eagles took off for Nellis Air Force Base, Nevada, in support of Red Flag 16-2, Feb. 25.

The two-week long exercise began Feb. 29 and concludes March 11. The exercise aims to continue training crews in air, space and cyberspace in combat scenarios to prepare for overseas contingences.

“Red flag is a large force joint collision exercise, so we got a lot of other players from other nations and other services,” said Maj. Gabe Lewis, 336th Fighter Squadron assistant director of operations. “The idea of Red Flag is to simulate those first couple days of combat so that when you go out into no kidding combat you’re not deer-in-the-headlights and you’re not struggling to keep up. It is the best exercise to prepare for combat.”

Red Flag was initiated in 1975 and is held annually on the Nevada Test and Training Range, providing realistic combat training for the United States and its allies. The range has more than 15,000 square miles of airspace and 2.9 million acres of land for the aircraft and crews to simulate a multitude of scenarios.

To help prepare for Red Flag and provide additional realistic training for today’s warfighters, members of Seymour Johnson Air Force Base, North Carolina developed a monthly exercise known as Razor Talon, which began in March 2011. It’s about half the size of Red Flag and is a low-cost, large-force training opportunity for joint East Coast tactical and support aviation units.

“Razor Talon provides a safe environment to train joint and combined warriors, using training battlespace available in the Mid-Atlantic region of the United States, to ensure they are prepared for operational challenges they are likely to face during a contingency,” said Lt. Col. Jason Watson, 4th Operations Support Squadron assistant director of operations and chief of Razor Talon.

Razor Talon operates with approximately 30 aircraft over the span of one day, whereas Red Flag combines more than 70 aircraft, including those from the Italian and Turkish Air Forces, with exercises spanning over two weeks.

“When I went to Red Flag six years ago we didn’t have Razor Talon,” Lewis said. “I would say the young guys we send out to Red Flag now are much better prepared having gone to Razor Talon before heading out.”

A crowd of more than 30 of Stratton’s friends, family members and fellow Airmen from the 48th Fighter Wing gathered as he pulled up to the protective aircraft shelter in his F-15C Eagle.

“My first flight in the F-15C Eagle was on Aug. 4, 1999,” Stratton remarked, asking that no one tell him how old they were back then. “Therefore, it’s taken almost 17 years to reach this milestone.”

As his wife, Tara, headed out to the PAS to greet her husband, she echoed his sentiment of the amount of time it has taken to accomplish 2,000 flying hours.

“I’m excited for him,” Tara said. “He’s been working toward this for a long time now.”

“We first met when he was assistant director of operations,” Novotny explained. “We were in the same squadron together, and I was the commander. Now, to see him leading the 493rd, it’s been really cool to see his success over his career. 2,000 hours! That’s a lot of flying in the F-15C. The sorties are short, and so that’s a lot of experience. It doesn’t happen as much as it used to. It’s really cool to see people get their 2,000-hour patches.”

“I am honored to have my wing commander, who has earned 2,000 hours in the Eagle, to put my 2,000-hour patch on as a squadron commander,” Stratton said.

2/19/2016 – PORTLAND AIR NATIONAL GUARD BASE, Ore. — Colonel Adam “Khan” Sitler joined an elite group of fighter pilots to reach 3,000 flight hours in an F-15 Eagle, Feb. 18 at Portland Air National Guard Base, Oregon. Sitler, an F-15 instructor pilot and the 142nd Operations Group Commander, crossed that threshold during a routine training mission here. He is the 99th pilot on record with Boeing as having achieved 3,000 flying hours in an F-15.

“Each and every sortie takes a team effort. No one reaches an aviation milestone on their own,” Sitler said. “I’m the beneficiary of countless hours of toil on the part of the most professional aircraft maintainers in the world. They deliver not just safe, but fully mission capable aircraft that I’m privileged to fly,” he said.

As the 142 OG Commander, Col. Sitler leads more than 375 personnel in the execution of the F-15 mission defending the Pacific Northwest, worldwide deployments supporting national objectives, and domestic operations activities as directed by the Governor. He has flown more than 50 combat missions and 250 combat hours in Operation Allied Force and Operation Southern Watch.

“He’s a great fighter pilot, an extraordinary leader and mentor to our junior pilots, and an overall asset to the Air Force and the Oregon Air National Guard,” said Col. Donna Prigmore, 142nd Fighter Wing Vice Commander. “Khan epitomizes the National Guard motto of ‘always on mission.’ It’s because of people like him that the Air National Guard is always ready, always there,” Col. Prigmore said.

Sitler speaks passionately about his Air Force job and the Air National Guard mission. “It takes continual practice to be ready to provide air superiority at any time, at any place.  It’s not an exaggeration to say that for every hour spent in the air, at least five or more hours are spent on the ground planning, preparing, briefing, and debriefing each and every sortie.  The American people expect us to be ready, and we’re ready to live up to that demand,” he said.

Colonel Sitler was commissioned in May 1996 after graduating from the United States Air Force Academy in Colorado Springs, Colorado. Upon completion of Undergraduate Pilot Training and F-15 Training, he was assigned to the 493rd Fighter Squadron at Royal Air Force Lakenheath, United Kingdom. He served as a Combat Mission Ready Wingman, Flight-Lead, Mission Commander and Instructor Pilot.